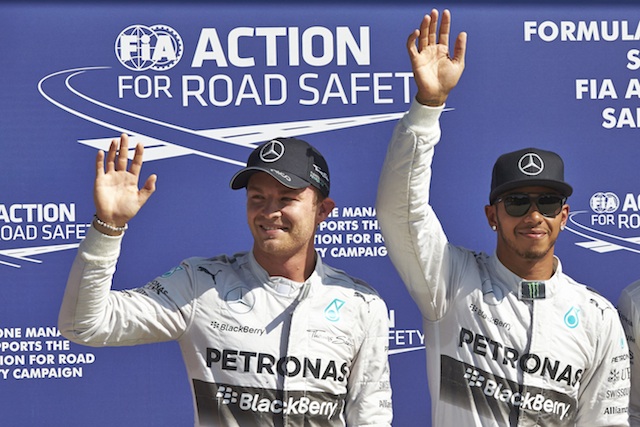 Warring Mercedes team-mates Lewis Hamilton and Nico Rosberg have confirmed that a warning from team boss Toto Wolff will not change the way they race in the Italian Grand Prix.

The pair will start Sunday’s race at Monza from the front row after Hamilton pipped his opposite number to pole by just two tenths of a second in qualiying.

Prior to this weekend’s race, Mercedes boss Wolff issued a warning to its two drivers that the team may have to take action if the pair continue to clash in the races, following the much publicised collision at Spa.

Wolff even hinted that the team could be forced to change its driving line up in an extreme case.

With the rivalry still simmering between the title rivals, Hamilton confirmed that he will not change his driving style come the race.

“Nothing changes for me,” said Hamilton.

“I’ve been racing for many years and I’ve not collided with too many people so I’ll just continue to race the way I do.

“I just want to win the right way and I’ll try to do it that way.”

Rosberg echoed Hamilton’s thoughts on the matter with the championship leader admitting he intends to race just as he has done throughout the season.

“It’s not changed. Already before, when we started the season, the message has been clear – so there’s no real change at the moment.

“So, from that point of change it’s the same as always, in a way.”

Meanwhile, Wollf remains confident that his drivers will not collide although he revealed that a discussion would take place regarding how the opening laps will play out.

“I think it is pretty clear where the line is,” Wolff said.

“And I have no doubt that this is how the race is going to pan out.

“Because we didn’t know the grid we didn’t have the discussion yet.

“But you can see that the two of them are so professional and experienced, that after the discussions we had in the week after Spa it should be pretty obvious and clear about what is going to happen.

“But we are going to have that discussion as always – the strategy discussion – and one of the points is going to be what is happening in the first couple of laps.”