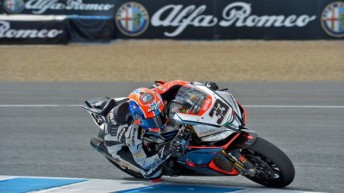 The Aprilia was forced to come from behind in both races having qualified only fourth as the Italian showed his class to fight through the pack to win.

Although Melandri denied title contender and Aprilia team-mate Guintoli from two crucial wins, the Frenchman closed the gap to championship leader Tom Sykes to just 31 points with four races of the season remaining.

Melandri dropped to as low as sixth at the start of race one but refused to give up as he scythed his way through the pack.

Team-mate Guintoli had led proceedings for the majority of the race but he was unable to stop a hard charging Melandri, who slipped into the lead with just four laps remaining.

In the end, Guintoli was left to settle for second while Ducati’s Chaz Davies came through to claim the final spot on the podium.

Polesitter Loris Baz led Guintoli at the start of race two before the Aprilia man grabbed the lead on lap three.

Meanwhile, Melandri had been lurking in the leading group in fifth position before he began to move through the field.

Having progressed into second with a slick move on the Kawasaki of Sykes, Melandri stalked Guintoli until he successfully made a move on his team-mate with five laps to go.

Melandri held firm to take a double victory from Guintoli and Sykes.

Davies finished fourth ahead of Rea and Laverty.

The World Superbike Championship heads to France’s Magny Cours circuit for the penultimate round on October 5.