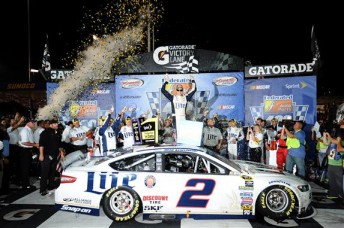 Miller Lite Penske driver, Brad Keselowski has taken the 400th win for Roger Penske as a car owner after taking victory in the Federated Auto Parts 400 at Richmond.

The fourth win of the season for Keselowski sees the former Champion entering the Chase for the NASCAR Sprint Cup as the Top Seed.

It was Penske’s 400th race win in major motor racing competition, whether it be IndyCar, NASCAR, Formula 1 or Sportscar.

Starting from the pole position, Keselowski led all but 17 of the 400 laps of the race.

“The Ford Fusion was just flying,” said Keselowski. “I couldn’t ask for a better way to enter the Chase – it being the 400th win for Penske. I want to win another Cup.”

The extremely hot conditions at Richmond for the night race took its toll on all drivers, with Chaser, Greg Biffle declaring it the toughest race that he’s ever done.

Jimmie Johnson was so heat affected, he collapsed upon exiting the car post race and was taken to the infield care centre for treatment, believed to be suffering from dehydration.

The race was punctuated by a competition caution at lap 50 and then with just over 70 laps to go, when a fan climbed the turn four catchfence.

Jeff Gordon crossed the line in second to annex position number two on the Chase seedings heading into the next race at Chicagoland.

Clint Bowyer scored a bittersweet third position. He missed the Chase by a mere seven points. Jamie McMurray and Kevin Harvick rounded out the top five.

It was an unhappy night for Marcos Ambrose in the #9 Richard Petty Motorsports Stanley Ford Fusion. The double V8 Supercar Champion was battling an ill-handling racecar for the majority of the event.

Tight from the start, he was brought to pit-road where a raft of changes were made to his car. These didn’t make much improvement to the Australian’s fortunes, as he continued suffering a litany of issues, including a lack of drive, understeer and rear grip at various stages.

The team tried its best to keep Ambrose pushing forward, however he ended the race 27th five laps down.

To add further insult to injury, his team-mate Aric Almirola and the #43 team made it into the Chase.

The full roster of Chase for the NASCAR Sprint Cup drivers (in seeded order) is as follows: