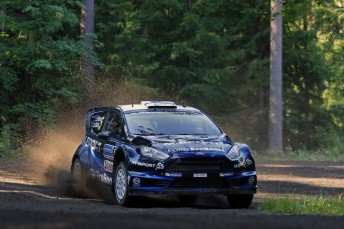 Hirvonen has recorded three Rally Australia wins at the three locations – Perth, Tweed, and the current Coffs Harbour – where the world championship has been staged domestically.

Significantly Hirvonen has a podium strike-rate of 67 percent in Australia.

The Finn had the distinction last year of being the only driver in the field to take a stage win off the Volkswagen trio of Sebastien Ogier, Jari-Matti Latvala and Andreas Mikkelsen at Coffs on his way to a third place finish.

M-Sport will celebrate 250 WRC starts at the Coffs rally with the team snaring 50 wins and two WRC titles for Ford under the guidance of managing director Malcolm Wilson.

The team will be looking to turn around a disappointing season that sees Hirvonen currently sixth in points with just one top three finish.

“This rally has always been a good event for us. In 2006 we claimed our first (FIA World Rally Championship) win in Australia, so it will always hold a lot of amazing memories for me,” Hirvonen said.

“We have occasionally been lucky, but the stages are fantastic to drive and some of them have a very similar character to those in Finland – it almost feels like being back at home sometimes.”

M-Sport has high expectations of its young Welsh driver Elfyn Evans who has acquitted himself well in his debut year with the team.

Evans is new to the Coffs rally however he had a sample of Australian conditions last year when he competed in a Fiesta R2 at the National Capital Rally in Canberra, considered the spiritual home of rallying in Australia.

“It’s another new event for us so the focus will be back on learning the stages and gaining as much experience as we can for next year,” said Evans, who is currently seventh, 16 points adrift of his team-mate, in the championship.

The rally kicks off with the shakedown on September 11 before heading to stages south of Coffs Harbour for the first leg of competition the following day.