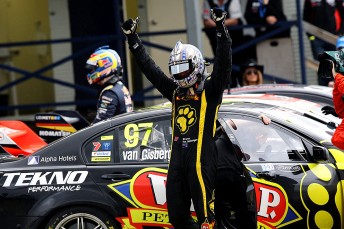 Tekno poses a strong threat in the shared driver races

Episode 5 of the 2014 Crimsafe Endurance Countdown looks at the sole Tekno Autosports Commodore.

The #97 Holden has been a bit of a hot and cold proposition this season, possibly suffering from the benefit a second team car brings.

That said Shane Van Gisbergen claimed two wins at the previous round at Sydney Motorsport Park in wet conditions, bringing his season tally to three following a win in Race 12 at Pukekohe.

Team owner Jono Webb comes in as Van Gisbergen’s team-mate with the team looking the strongest of the single car operations.