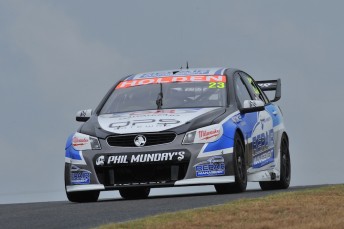 Episode 2 of the 2014 Crimsafe Endurance Countdown focusses on the sole Commodore prepared by Lucas Dumbrell Motorsport.

Reduced from a two-car to a one-car operation this year LDM has shown occasional flashes of competitiveness.

With Russell Ingall extending his career after premature proclamations of retirement at the end of 2013, LDM has been capable of running up the front at times.

Veteran Ingall, a two-time winner of the Bathurst 1000 in the 1990’s, is joined at Sandown, Bathurst and the Gold Coast by Tim Blanchard who was the final co-driver to be named for the enduro series.