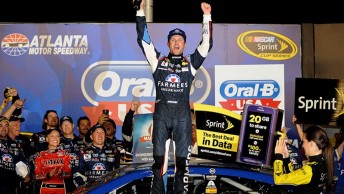 Kasey Kahne has made the Chase

Kasey Kahne has joined his Hendrick Motorsports team-mates in making the Chase for the Sprint Cup with victory at the Oral-B USA 500 in Atlanta.

Kahne took the lead from Matt Kenseth in the second attempt at a green-white-chequered finish to make NASCAR’s version of the play-offs with one race remaining. It was his 17th career race win and he will take part in the Chase with stablemates Dale Earnhardt Jr., Jeff Gordon and Jimmie Johnson in the Chase.

“It took a lot,” Kahne said. “We were all over the place. The guys stayed with me and worked hard,” said Kahne.

Kenseth finished second and also clinched a spot in the Chase on points despite not having won a race this season.

Australia’s Marcos Ambrose was classified 42nd after he had an engine failure and will have his final chance of making the Chase at Richmond International Raceway next weekend. 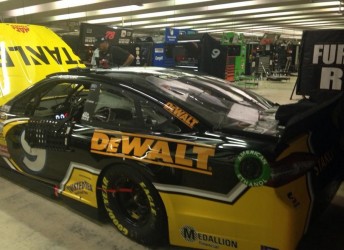 “We were fighting to get our lead lap back and was working hard at it, but it just wasn’t meant to be,” said Ambrose.

“Something happened going into turn two with the engine. It didn’t give any warning, and there was nothing I could do.”

Tony Stewart’s return didn’t end on the right note after he finished one place ahead of Ambrose when he hit the wall after contact with Kyle Busch. Despite several pit stops to repair the damage his night was done after again hitting the wall after tyre failure.

“We got off to a good start,” said Chad Johnston, Stewart’s crew chief. “I went into today with some pretty high hopes of finishing well and possibly coming out of here with a win, but it just didn’t work out in our favor. We got into a little trouble with (Busch) and got into the outside wall and a lot of heavy right side damage.

“We were just trying to fix that and salvage what we could, but then we blew a right front. It’s really good to have him back.”

The other driver to have a tough night was Clint Bowyer, who entered Atlanta with a 31-point cushion over the Chase cut-off line. However, a transmission problem sent him the garage for repairs, dropping him to 38th at finish.

He could make the Chase via points at Richmond but now will need a win to be certain.