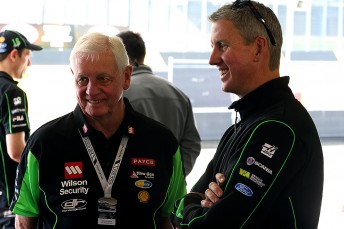 The first episode of the 2014 Crimsafe Endurance Countdown takes a look at the Dick Johnson Racing Fords of David Wall/Steven Johnson and Scott Pye/Ashley Walsh.

With the spectre of possibly being bought out by the huge Penske organisation lingering through the year, DJR has been headline news.

Its on-track performances however have seen some inconsistent results amid a heavy shunt early season for David Wall at the Pukekohe round.

Wall will commandeer the #17 car alongside Steven Johnson for the tri-race enduro series which is highlighted by the Bathurst 1000 where the car will feature special one-off Shell livery.

See below for episode 1 of the Crimsafe Endurance Countdown