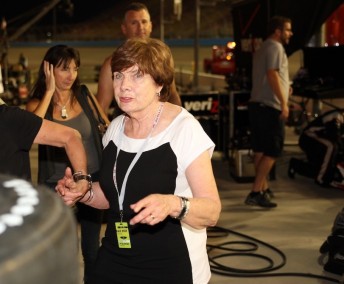 A nervous Marg Power sat through a tense few hours waiting for destiny at the Auto Club Speedway at Fontana.

Very rarely frequenting a racetrack, the Toowoomba mother of Will Power nervously paced out the time it took the 33-year-old to become the first Australian driver to win the IndyCar title in the 250-lap marathon.

“I was just walking through it and pacing myself and pacing Will and hoping for the best,” Mrs Power said.

“I’m very proud because he has been doing some form of motor racing since he was 15 so it’s been a long run.”

“And it’s been very hard to win the championship in IndyCar.”

Mrs Power revealed some of the antics the family endured in Toowoomba when Will was trying to craft a career.

“Sadly he was a two-wheel forklift driver,” she said of his hair-raising antics behind the controls of a forklift.

“And he got into a lot of trouble.

“We had to take him from that job and give him another one.”

Power has now silenced his critics by doing a job on the IndyCar field after coming close to winning the title three times previously.