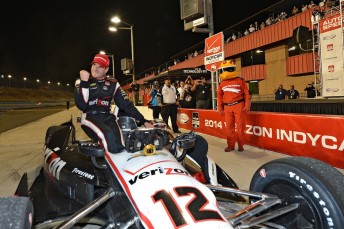 Will Power has conquered his demons to scale the pinnacle of American open wheel racing and claim the 2014 Verizon IndyCar Series in California.

Spurred on by failing to clasp three chances to win the title previously, Power became the first Australian to win the diverse series run on a mix of street, road, short and high-speed oval circuits.

Power had to hang to an increasingly oversteering car before finishing ninth in the 250-lap finale at the high-speed Auto Club Speedway at Fontana to claim the title and a $1 million prize-winning booty.

The race was won by Tony Kanaan who landed  his first race for Ganassi since coming into the squad at the start of the year to replace the retired Dario Franchitti.

Chief rival and Penske team-mate Helio Castroneves diced for the lead with Juan Pablo Montoya (fourth place) and hung tight at the front for much of the race before a late penalty saw him finish 14th.

Ganassi’s Scott Dixon was second ahead of Ed Carpenter who overcame an earlier pit plane penalty.

Power executed a pre-race plan of starting cautiously from the rear under the expert coaching of Team Penske president Tim Cindric on the radio.

“That was one of the hardest races of my life. It just went on and one and I was crying over the line,” Power said, who clinched the title by 62 points from Castroneves.

“I was so mentally exhausted out there. My hands are so numb from hanging onto the wheel so tight.

“I want to be a lot more excited but I’m just so drained.”

After a slow start when Power let the field go, he had entered the top 10 for the first time after 74 laps before moving into seventh just over half-race distance.

Power then sliced into the lead shortly after the restart after a yellow caused by Ryan Hunter-Reay’s spin with 70 laps remaining before falling back just behind the pace.

Castroneves’ hopes eventually evaporated with 30 laps remaining when he was called in for a pit lane infringement.

“It’s another second, but well done to Will,” said Castroneves, a three-time Indianapolis 500 winner who is seeking a maiden series crown.

“It stings a little bit, but it motivates me to come back stronger next year and win a championship.”

With Castroneves mired down worse than midfield, Power was fighting a loose handling car after his crew had misread a call adjustment on the front wing and after asking for advice on how to handle the situation, he was told to keep fighting.

After trading the early lead with Castroneves, Montoya dominated the first quarter of the race before James Hinchcliffe (fifth) took command.

Power now joins an elite club within the Penske empire which has now claimed 13 drivers titles since the 1970’s.

The Australian’s tempered effort under Cindric’s consoling advice in the closing stages, saw Penske clinch its first series since Sam Hornish jr since 2006.

The Toowoomba born and raised Power was first drafted into the Penske squad in 2009 replacing Castroneves, who at the time, was facing tax evasion charges which he subsequently beat in the US.

Simon Pagenaud, who came in with an outside chance of winning the title, suffered from big handling problems and was the first to pit with his race shot before finishing 20th.

The Schmidt Peterson Motorsports driver will remain at Loma Linda University Medical Center while he recovers from his injuries which also included fractured ribs, a broken right clavicle (collarbone) and concussion.

Aleshin was involved in a horrifying accident during final practice when his car took flight after colliding with Charlie Kimball before spinning end-to-end along the catch fencing.

See below for results of the MAVTV Auto Club 500