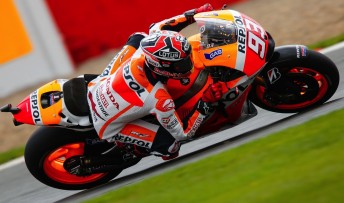 Marc Marquez sent a message to his rivals with a dominant performance in qualifying to secure pole position for the British Grand Prix.

The Honda rider, who had topped the timesheets in the four previous free practice sessions at Silverstone, continued his domination of the event in qualifying, setting a personal best time a full three tenths quicker than his nearest rival.

Having claimed his 10th pole of the season, Marquez will start alongside Ducati’s Andrea Dovizioso and Yamaha’s Jorge Lorenzo.

Lorenzo pushed Marquez hard throughout the session as he forced the reigning champion to dig deep to produce an impressive 2m00.829s final lap effort to claim pole.

Dovizioso pipped Lorenzo to second by 0.035s in the dying seconds of the session.

Aleix Espargaro issued a surprise on the Forward Yamaha by securing fourth on the grid just ahead of Czech Republic Grand Prix winner Dani Pedrosa and Yamaha’s Valentino Rossi.

Australia’s Broc Parkes will start from 23rd on the grid for Paul Bird Motorsport.

Meanwhile in Moto3, Queenslander Jack Miller faces a battle to extend his championship lead after qualifying a lowly eighth.

The Red Bull KTM rider from Townsville was more than a second adrift of polesitter Alex Rins, while title rival Alex Marquez will start Sunday’s race from third.

Miller holds a 23 point lead over Marquez in the championship standings heading into Silverstone.