Stewart speaks publicly ahead of return

Stewart speaks publicly ahead of return 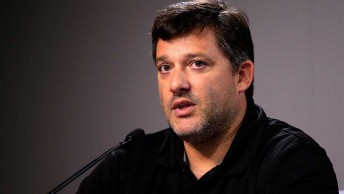 An emotional Tony Stewart has made his first open public statement since a sprint car incident which claimed the life of Kevin Ward Jr.

Stewart addressed the media ahead of this weekend’s NASCAR race at Atlanta with a prepared statement which lasted nearly 2.5-minutes. Stewart will make his Sprint Cup Series return in Atlanta after missing the previous two weekends following the accident in upstate New York.

The NASCAR star spoke about his emotions and thanked the wider racing community for its support. He went to lengths to say that no matter what emotional pain he was dealing with it was nothing compared to that of Ward Jr’s family and friends.

“This has been one of the toughest tragedies I’ve ever had to deal with both professionally and personally,” said Stewart.

“This is something that will definitely affect my life forever. This is sadness and a pain that I hope no one ever has to experience in their life. With that being said, I know that the pain and the mourning that Kevin Ward’s family and friends are experiencing is something that I can’t possibly imagine.

“I want Kevin’s father, Kevin Sr., and his mother Pam, and his sisters Christi, Kayla, Katelyn, to know that every day I’m thinking about them and praying for them.”

After reading his prepared statement Stewart immediately left the media conference sighting that he was not in a position to answer questions as the investigation is continuing. He also stated that emotionally he was still not prepared to take questions from journalists at this point of time.

What was also announced is that despite missing the two races, NASCAR will allow Stewart to contest for the Chase for the Sprint Cup should he win either in Atlanta or Richmond next weekend.

NASCAR President said that decision, along with welcoming Stewart back to race, was made after consultation with a wide range of people within and outside the sport.

“I think particularly those of us that follow this sport every weekend know that driver’s healing processes are unique, but they are race car drivers, and a lot of times getting back in a race car is something they shoot to do as quickly as they can,” said Helton.

“So once Tony decided to come back, we then had to go through the policies and the procedures and the steps that we’ve historically built over time to make the absolute most correct decision we could make under the circumstances we were handed.”

Stewart-Haas Racing’s executive vice president Brett Frood backed Helton’s decision to allow Stewart to race and that he knew he would have the backing of his fellow drivers and teams.

“I think it’s going to be very overwhelming being in that garage today,” said Frood.

“He’s going to feel an awful lot of support. As I just mentioned, this is his family. It’s the crew members, it’s the officials, it’s the drivers. It’s his family that he’s been with since 1999. This is going to be part of that process for him. I believe it’s going to be an overwhelming process, this weekend.

“That being said, Tony Stewart is a race car driver. He’s been a race car driver for the past 35 years. When he puts that helmet on in practice, I’m quite convinced he’ll be ready to race the car, he’ll be able to separate the two.”

Stewart’s team-mate Kevin Harvick said he was glad to have Stewart back on track.

“I’m least concerned about the racing side of it,” said Harvick.

“I know for him, that’ll be great medicine to have some type of normal activity in his life again that he hasn’t been able to have.

“From a personal standpoint, I’m glad to see my friend and be able to talk to him and be able to support him through what will probably end up being the hardest situation he’s ever had to go through in his entire life. That to me is the most important thing, and I just can’t wait to see him.”

Stewart set the 10th fastest time in opening practice for the Oral-B USA 500. Qualifying will be in the early evening local time.