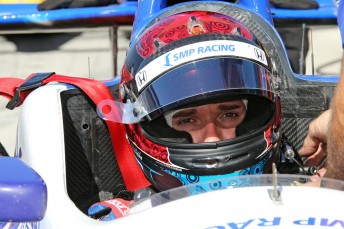 Russian driver Mikhail Aleshin slammed into the catch fencing in a terrifying accident during final practice for the IndyCar series decider at Fontana.

As teams took the the track for the evening practice run following qualifying earlier in the day, Aleshin’s car pitched into the air and ripped a gaping hole in the fencing.

It appeared the Schmidt Peterson driver steered below the white line before spinning and collecting Charlie Kimball (Ganassi Racing). 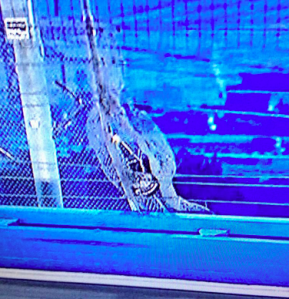 The damaged section of catch fencing at Fontana

IndyCar put out a brief statement saying that Aleshin was conscious and had suffered injuries to his right shoulder and right foot.

Other drivers described the impact as being akin to a ‘cheese grater’.

Helio Castroneves who had earlier set a blistering two-lap average to top qualifying was sixth fastest.

Kimball’s team have set about building up a spare car for the Californian driver.

Track workers are now left with a major repair job ahead of the MAVTV 500.

*Stay with Speedcafe.com for the thrilling series finale tomorrow.