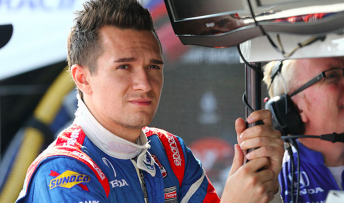 The IndyCar Series has released a statement confirming that Mikhail Aleshin remains in a serious but stable condition following his huge shunt during final practice at the Auto Club Speedway in Fontana.

After initially complaining from injuries to his shoulder and right foot, doctors at the nearby Loma Linda University Medical Centre have diagnosed fractured ribs, a broken right clavicle, concussion and chest injuries.

The impact was so devastating that it left a gaping hole in the catch fencing at turn 4 of the high-speed oval.

Aleshin was airlifted to hospital after the crash.

Kimball was assessed at the infield medical centre and has been cleared to race with his squad building up the spare car for the 250-lap finale.

Will Power will start 21st in his quest to win the title while chief rival and team-mate Helio Castroneves is on pole following qualifying which preceded the final practice run.