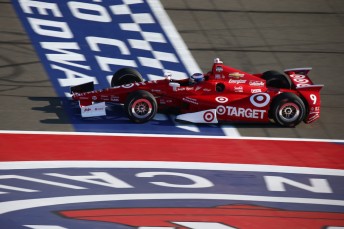 Ganassi veteran Scott Dixon has speared to the quickest lap in the open test at Fontana’s Auto Club Speedway.

Ahead of the Verizon IndyCar series finale this weekend, Dixon turned a best lap of 353.19km/h after topping the opening test earlier in the evening in his Chevrolet-powered Dallara.

The 2013 IndyCar Series champion was stripped of the best lap inside the final hour by Penske driver Juan Pablo Montoya in the final three-hour run before reclaiming the top with 12 minutes remaining.

Montoya’s best lap of 352.7km/h lap survived to be second while oval gun Ed Carpenter was third fastest in 352.63km/h.

Graham Rahal completed the top four with a 352.53km/h best to be the leading Honda-powered driver.

Australian Will Power, who goes into the 500 mile (800km) season finale this weekend with a 51-point lead over Helio Castroneves, was ninth fastest in the test-cum-practice run.

Castroneves was fifth fastest in 352.44km/h.

Simon Pagenaud, third in the standings 81 points behind Power, was 16th after suffering a heavy shunt in turn 2 inside the final 30 minutes.

The second Australian driver Ryan Briscoe (Ganassi) was just nudged out of the top 10 by Schmidt driver Mikhail Aleshin.

There remains a total of 104 points on offer at the Fontana race including bonuses.