Will Power on the verge of his maiden IndyCar title

Will Power faces the most important weekend of his racing career at Fontana.

The IndyCar star clutches a 51-point lead over his team-mate Helio Castroneves going into the finale, a 500-mile journey around the D-shaped Auto Club Speedway south of Los Angeles.

The Toowoomba native has seen three chances of lifting the IndyCar crown slip in the past and with a total, including bonuses, of 104 points on offer across the weekend, Power is perilously close to finally sealing the deal.

In a candid sit down chat, Speedcafe.com caught up with Power as he attempts to supply Roger Penske with his first IndyCar Series crown in eight years.

SPEEDCAFE: Will, it’s been another memorable IndyCar campaign for you.

There’s been some great wins, but also some costly incidents, including a string of pitlane penalties mid-season.

How hard have you had to eliminate those mistakes ahead of this weekend’s finale?

POWER: It’s funny how those things go. I had a bunch all at once.

It’s so competitive these days you are looking for every little edge on in laps, out laps and so on.

Most of them (the races with penalties) were good recoveries actually. I’d had a drive-through and then come second.

Indy was probably the biggest hit at a drive-through in both the road course and the oval and I finished eighth.

But you’ve got to keep it clean.

SPEEDCAFE: A championship never comes quickly enough but I guess would you agree that there is a lot of patience and persistence that is required?

POWER: For me the past three championships would have been such easy ones to win. Now it just seems to get harder and harder every year.

I’m just happy to be back in that position to have a chance and see if I can finish the job.

SPEEDCAFE: You’ve mentioned the work you’ve put in over the last couple of seasons to become a winner on ovals both superspeedway and short tracks. What specifically has been the turning point?

You gain experience and you gain confidence because ovals are all about confidence.

You’ve got to be happy with the rear moving around a little which can be really nerve wracking when you are not used to ovals.

It’s really about dialling in and understanding what a car needs, good feedback and just a whole combination of things.

At the end of the day it just comes down to experience.

The more you do them, the more comfortable you get (and) the more boxes you tick to put the whole package together. SPEEDCAFE: You came back strongly to win three of the last four events in 2013 after what was a horror season before that. What did you glean from that?

POWER: It was definitely a case of coming into this season more focussed and positive.

Fitness wise and focus wise I’ve definitely been on top of things a lot more this season so that’s put me in a positive I’m in right now.

SPEEDCAFE: Has it been different this year fighting for the title essentially against a Penske rival in Castroneves, compared to the years you fought non-Penske drivers such as Dario Franchitti and Ryan Hunter-Reay?

POWER: It’s just been a different year altogether because in the past it was just two people but now every week there is a new winner, it’s a new group of guys.

Out of the 22 drivers they are all capable of winning so its just a different type of championship.

It’s more about consistency and finishing races than it was about winning but winning obviously is a big deal.

But it’s the first time I’ve fought a team-mate in a championship at this level.

We don’t talk about it. We just go out there and do our job.

SPEEDCAFE: What would it mean to become the first Australian to lift America’s biggest single-seater championship?

POWER: For me it would be like 15-20 years of hard work to get to this point if I won the championship.

It’s been all those years spent working towards this point which would mean a lot.

And being the first Australian and everything that comes with it, the way the field is at the moment it would be just a great personal achievement.

SPEEDCAFE: If you win the championship next weekend who are some of the people you would single out how helped you get to where you are?

POWER: There’s a lot of them starting with my parents (Bob and Marg). Mark Larkham gave me my first paid drive in a V8 Supercar and he’s kind of been a bit of a mentor of mine.

We’ve kept in contact over the years. Maher Algadri, Tom Warwick, Mark Webber there’s a lot of guys who contributed to me being in this position.

Craig Gore and Derrick Walker who gave me my chance in Champ Car and to move to the US. It’s really a dream come true to be a professional racecar driver.

SPEEDCAFE: With no engagement in Australia any more after the withdrawal of IndyCar from the Surfers Paradise race, an important connection with your homeland has been lost. Do you feel you get the recognition of what your are doing in IndyCar from your compatriots or does that not bother you?

POWER: Yeah I think having a race on the Gold Coast which is like a hometown to me.

I spent a lot of time down there as a kid and we always had a house down there.

So I think it’s a real pit that they let that race go. 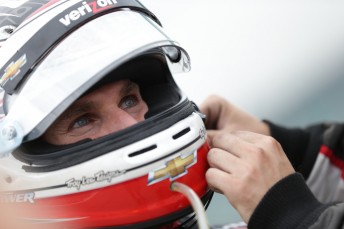 For IndyCars it was a real loss when they stopped going to Surfers Paradise.

For sure you don’t get the coverage you would having a race there but that’s the way it is.

SPEEDCAFE: IndyCar has been through some turbulent waters over the last couple of decades however the Indy 500 has remained solid all the way through this period. Do you feel a championship win would be as big as Indianapolis?

POWER: It was always the championship for me but the more you do the 500 the more you grow to love the event.

It’s just so big and it’s a tough race to win. I’d take either but right now the championship is on my mind.

I’ve missed out three times so it’s obviously in my heart to try to win that.

SPEEDCAFE: What are your views on the opening up of the body kits in IndyCar with things seemingly opening up on the technical front?

POWER: That’s going to be interesting.

There’s some significant changes to the bodywork for next year which are going to make the cars develop a bit more downforce and maybe some efficiency as well.

Honestly the racing has been so good since they bought this new car in.

It’s kind of a pity then if it does affect the racing and the cars become a bit more sensitive to the turbulence.

I’m hoping that it maintains good racing because it’s a great package as it is now.

No-one can change anything. Everyone has got the same stuff, same tyres … it’s really specced.

If you are on the good side of that its great.

For the sport, the way it is now is pretty good.

SPEEDCAFE: There’s been talk of Roger entering V8 Supercars in the future. Is that something you’ve been across? If that happens is that a gate to come back home at some point?

POWER: Yeah possibly. If Roger does do something in V8s it would be definitely a potential to do endurance races.

I obviously haven’t spoken to him about it and he hasn’t talked much about it.

That would be an obvious potential move if I’m done with IndyCar but obviously that’s well down the road.