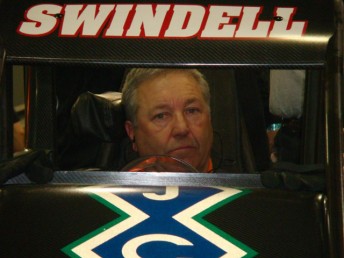 American Sprintcar legend Sammy Swindell has announced his immediate retirement from the sport.

The 58-year-old has made the shock decision after a two week break and will focus his energies towards his son, Kevin, who will line-up in the NASCAR Nationwide Series for the remainder of 2014.

“After the last two weeks of our break from racing I have decided to retire from racing. I would like to still drive my midget at the Chili Bowl,” said Swindell.

“I have been thinking a lot about this for the last three months. It has been a hard decision to make. I always knew when the time came to retire it would be clear.

“Part of the reason for the timing now is I’ve spent the last two weekends with my son, Kevin, racing.

“I haven’t had any time to spend with his racing the last four years. He will drive a (NASCAR) Nationwide car for the rest of the year and I want to be there to support him.”

Swindell was one of the original World of Outlaws in 1978 with Doug Wolfgang and Steve Kinser – who announced at the end of last year that 2014 would be his last full-time season behind the wheel.

The Germantown, Tennessee native has scored 294 World of Outlaws victories and over 500 Sprintcar victories throughout his storied career.

He’s been praised as an innovator by STP World of Outlaws Race Director, Carlton Reimers.

“Sammy’s talent is more than a driver, he is an innovator,” said Reimers.

“He was one of the ‘Big 3’ along with Steve Kinser and Doug Wolfgang in the early days, and he persevered through the years. He was a threat to win every night. I hope he and Kevin find all the success they want.”

Swindell has always been considered one of the most polarising personalities in the sport.

A driver able to do what few others can behind the wheel, but outside the car at times taciturn.

The decision by Swindell to quit and Kinser’s decision to drastically reduce his outings at the completion of this season represents a seismic shift in the sport that hasn’t been seen in the Outlaws era of Sprintcar racing.

It also brings the curtain down on one of the most enduring rivalries seen in any form of sport around the globe, one that is as intense nearly 40 years after it began.

With a fear of flying, Swindell long resisted coming to Australia to compete until the first ever World of Outlaws Downunder event at Parramatta City Raceway.

From the time he arrived, he was a sensation and has made several more trips to Australia since.

The younger Swindell has been a regular in Australia – even up to last summer – and is now well on the path of a NASCAR career.