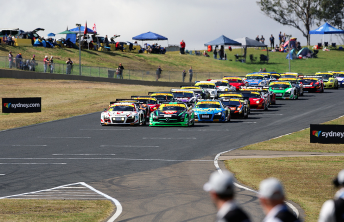 Australian GT organisers have completed an early reveal of their 2015 championship calendar, featuring a return to the Clipsal 500 Adelaide.

Adelaide kicks-off the new schedule, replacing this year’s season-opener at Sandown, held with the Shannons Nationals.

The remainder of the calendar is unchanged, with appearances at the Townsville, Sydney Motorsport Park and Sandown V8 Supercars events supplemented by endurance races at the Phillip Island Shannons Nationals and independent Highlands 101 meetings.

While exact dates of the V8 Supercars events are yet to be confirmed, AGTC category manager Ken Collier says that it’s important for his competitors to see a calendar as early as possible.

“Competing at this level requires planning, especially with so many teams campaigning drivers whose full-time roles have nothing to do with the sport,” he said.

“One of the things that has been a discussion point in past years has been delivering a calendar early so that many of those teams could plan well in advance in order to complete the full six-race program.”

While recent conflict between V8 Supercars and the Bathurst 12 Hour has made headlines, the Tony Quinn-owned AGTC says it values its alliance with the touring car class.

“Australia can really only support one high profile series, and the way the world is going economically, I can’t see that changing any time soon, so it made perfect sense for us to form a strong alliance with V8 Supercars,” said Collier.

“Each of our rounds with V8 Supercars will include two hours of racing, with the expectation that if the schedule allows, there will be two 60-minute races with compulsory pitstops.

“We will then include a season final with the Highlands 101 in New Zealand, and contest a 101-lap event, or something very similar, at Phillip Island mid-season.”

The category has also confirmed that it will again enjoy primary backing from tyre supplier Pirelli in 2015.