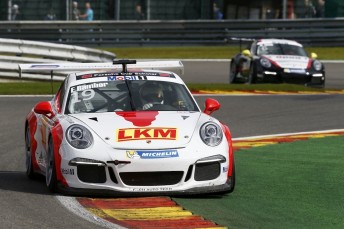 Earl Bamber on his way to victory at Spa

New Zealand’s Earl Bamber assumed the lead of the Porsche Supercup championship after taking a commanding win at Spa Francorchamps.

The Wanganui racer dominated the weekend topping the timesheets in free practice and qualifying, before taking the chequered flag for the second time this season.

Bamber was made to work hard in the early stages after losing the lead to Nicki Thiim on the opening lap. The Kiwi reclaimed the position on lap six and once in front he cruised to the chequered flag.

“Fastest in free practice, pole position, victory and now the points’ leader – what a perfect weekend. I’m over the moon,” said Bamber.

Bamber’s victory has opened up a three point lead over Kuba Giermaziak in the championship. 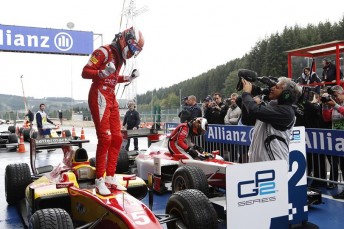 The feature race was interrupted by a heavy rain shower which halted proceedings before being restarted under the Safety Car.

After emerging behind the McLaren junior after the mandatory pit stop, the Italian eventually caught and passed Vandoorne with just two laps remaining.

Cecotto Jr was third ahead of title contender Felipe Nasr and New Zealand’s Mitch Evans, who was lucky to finish after a mechanical problem forced him into a spin.

Nasr reduced championship leader Jolyon Palmer’s advantage to 32 points with his fourth win of the series in the sprint race. Cecotto Jr was second ahead of Palmer and Evans. 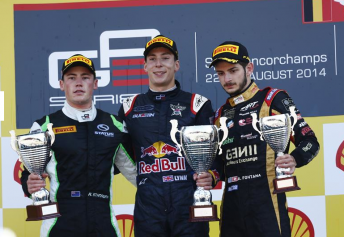 Alex Lynn, Richie Stanaway and Alex Fontana on the podium after race two

Tauranga’s Richie Stanaway remains in the hunt for a maiden GP3 title despite being denied a third win of the year by Alex Lynn.

The Kiwi briefly took the lead on the opening lap after Lynn made a mistake, but he was unable to keep the Brit behind him.

Just two seconds separated the pair at the flag while Alex Fontana finished a distant third.

Dean Stoneman made the most of a decision to run slick tyres on a damp but drying track as he went on to take his second win of the year in the opening race.

After inheriting the lead early on, the Brit finished ahead of fellow countrymen Dino Zamparelli and Nick Yelloly. Stanaway came home in seventh ahead of Lynn in eighth.

Lynn leads Stanaway by 32 points ahead of the next round at Monza in two weeks’ time. 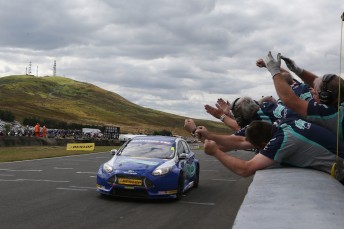 The triple BTCC champion spent the early stages of race one in fifth before surging up through the field by passing polesitter Sam Tordorf, Rob Austin, team-mate Gordon Shedden and reigning champion Andrew Jordan.

Neal went on to take his first win behind the wheel of the Civic Tourer from Austin and Shedden, while championship leader Colin Turkington retired.

Jackson ended a win drought of almost two years for Motorbase Performance in race two after he inherited the lead from Neal, who was given a penalty for a jump start.

Plato finished second for MG with Austin on the podium again in third.

Collard won the reverse grid race having battled from sixth on the grid to take the chequered flag in the WSR BMW from Dave Newsham and Turkington.

Turkington holds a 23 point lead over Shedden in the standings.

Team Schubert’s Dominik Baumann and Thomas Jager produced an impressive come from behind win in the  Blancpain Sprint Series main race at the Slovakia Ring. 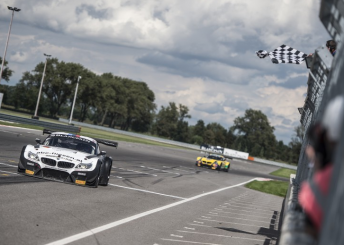 Having retired from the opening race, the BMW pair scythed their way through the field from the back of the grid.

The pair moved into fifth spot after a stunning opening lap before a slick pit stop strategy helped them to victory, taking the lead with just two laps remaining.

The first stoppage was caused by a huge crash for Reiter Lamborghini’s Tomas Enge, who  escaped a frightening series of end over end rolls. Heavy rain later on saw the race come to a halt once again.

In the end, Ramos held his nerve to take the chequered flag from the Grasser Lamborghini of Hari Proczyk and Jeroen Bleekemolen. The HTP Mercedes of Maximilian Gotz and Nico Verdonck was third. 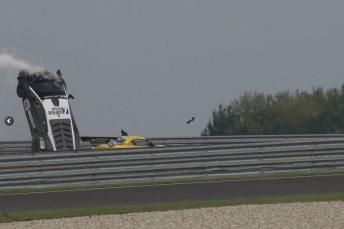 Risi Competizione won an all GT United Sportscar race at Virginia Raceway after Giancarlo Fisichella put a move on leader Wolf Henzler on the final lap.

The former F1 star, who shared the Risi Ferrari 458 with Pierre Kaffer, went on to take the chequered flag by just four tenths of a second from the Henzler/Bryan Sellers Falken Porsche.