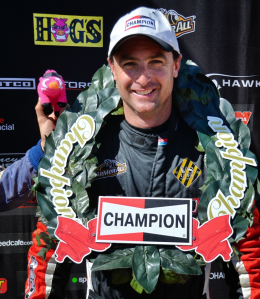 Kris Walton is optimistic a speedy recovery will allow him to defend his Australian V8 Ute Series lead after breaking his hand in a go kart accident.

Walton, who leads the ARMOR ALL standings on 498 from David Sieders’ 480, faces a battle to be fit for round 5 of the series at Sandown from September 12-14.

“I’ve fractured it below the pinkie. It’s in splints so that it can’t be moved and I can’t take the splint off for another two weeks,” Walton said.

“I’m making progress. I originally had three fingers strapped but now I’m down to two, so hopefully in the next two weeks it will be all good to go.”

“The most frustrating thing is that I can’t race anything.

“I’ve been racing so much this year and it’s hard to just sit and watch, so I’ll definitely be keen to get behind the wheel come Sandown.”

Walton has a strong record at the suburban Melbourne track, winning race 2 there on debut in 2011.

“We’ve had a good run every time we go there, so I’m feeling quietly confident, I hope to extend our lead a bit more.”

Pretty coincidently drove with a broken foot at last year’s Bathurst round but still boasted some decent results.