Crashed Falcons in doubt for Sandown 500

Crashed Falcons in doubt for Sandown 500 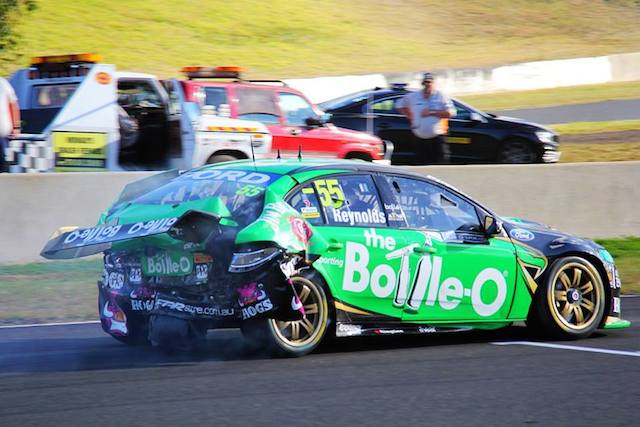 Scott Pye and David Reynolds may both be driving spare chassis at the Wilson Security Sandown 500 after their heavy accident at Sydney Motorsport Park.

The two Ford drivers made hard contact with the exposed concrete wall at the exit of Turn 3 in an incident triggered by Mark Winterbottom.

While the duo escaped relatively unscathed both cars suffered extensive damage and, according to their respective teams, are in doubt for Sandown.

Pye’s Falcon will sit in the team’s transporter at SMP today while the squad completes a ride day with its remaining David Wall-driven chassis.

DJR’s crew will start dismantling Pye’s car at its Queensland headquarters on Tuesday before deciding whether to send it on to chassis specialists Pace Innovations, or instigate a back-up plan.

“Until you get the car back to the workshop and put it on the jig to see where it’s bent you don’t really know, but it doesn’t look good at the moment,” Steven Johnson told Speedcafe.com of the damage.

“It’s a massive hit and everything has been pushed back in the front of the car.”

If the damage is too significant to be repaired, Pye and co-driver Ash Walsh would most likely revert to the chassis David Wall crashed at Pukekohe earlier this year, which has yet to be fully rebuilt.

The Wall accident was a signifiant set-back to the cash-strapped team’s season and the latest incident is clearly another big blow.

“It’s frustrating, especially when things like that are avoidable,” said Johnson.

“We’ve spent more money on major crash damage this year then I think we have in the last 10.

“I can’t remember the last time we wrote a car off and we’ve pretty much done two this year, by the look of it.

“It’s the last thing we needed but we’ve found our way around it once, so we’ll keep going.”

FPR team principal Tim Edwards meanwhile told Speedcafe.com that Reynolds’ chassis would be transported back to Melbourne on Sunday night, rather than waiting for today’s ride sessions to be completed.

“We’ll get it home and make a decision on whether we repair it for Sandown or use one of the spare cars.”

Adding to the challenge for FPR is the need to have a car ready for Reynolds and co-driver Dean Canto to drive at the team’s pre-Pirtek Enduro Cup test day at Winton on September 1.

Despite the extent of the damage, Edwards says that a spare won’t necessarily be required for the test.

“It really depends on how long it will take to repair and until we get it on the jig we won’t really know,” he said.

“We’ve got two spare cars so we’ll make the decision during the week.”

The team’s spares consist of the car that was last raced by Chaz Mostert at Albert Park, which is scheduled to become the Super Black Racing entry at Bathurst, or its newest, un-raced chassis.

DJR and FPR’s toil adds to that of Walkinshaw Racing and Volvo Polestar Racing, which both had cars heavily damaged on Saturday.

Both teams will also take part in today’s ride day at Sydney Motorsport Park with reduced fleets and are hurriedly preparing to test alongside their rivals on September 1.

The Wilson Security Sandown 500 will take place on September 12-14.

CLICK HERE for more from Pye and Reynolds on their accident 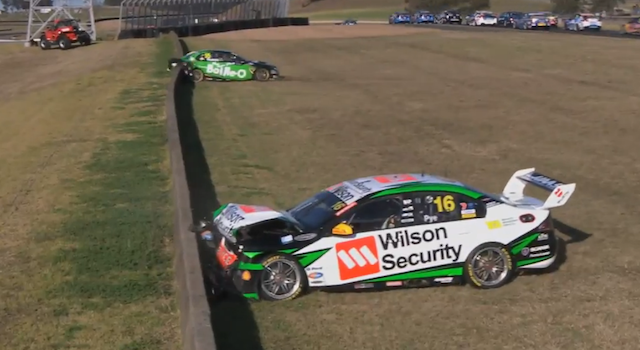 The Pye and Reynolds Falcons make heavy contact with the barrier