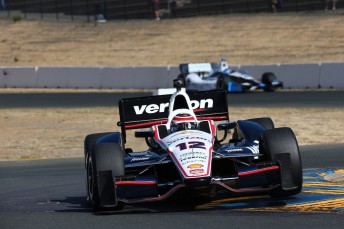 The intriguing battle for IndyCar supremacy showed no signs of abating with Will Power soaring to his fourth pole position of the season ahead of the GoPro Grand Prix of Sonoma.

Power scavenged another bonus point to move to a 40-point advantage going into the 85-lap penultimate race of the Verizon IndyCar series by surging to the prime starting berth.

His closest rival and Penske team-mate Helio Castroneves, fastest in final practice, was the slowest of the runners to advance to the Firestone Fast Six.

Starting alongside Power is the Sarah Fisher Hartman driver Josef Newgarden who posted a 1:17.73s lap, .31s short of the Australian’s best tour.

Ganassi star and defending series champion Scott Dixon was the only other title contender to advance to the final part of qualifying and will start from third position.

Briscoe admitted his set-up was different to the other Ganassi cars during qualifying.

“My car is quite different to the other three on the Ganassi team. I’ve been pretty happy with it but it just wasn’t good enough for the pole today,” Briscoe said.

When asked for his views on how the championship will play out he said Power will be hard to stop if he converts from pole at Sonoma.

“The final race where there are 100 plus points on the line is what is going to decide the championship.

“I think if Will comes out of here on top then it is going to be hard to stop him.”

The other three title contenders fell away earlier during the unique road and street course format to determine the starting grid.

Meanwhile the race for the Indy Lights title intensified with Briton Jack Harvey winning the 25-lap affair from pole.

Harvey (Schmidt) has moved to within 12 points of series leader Gabby Chaves after the Colombian finished second for the Belardi team.

Matthew Brabham finished sixth in the Andretti Autosport machine ahead of the final race of the season tomorrow.

“We had no traction off the slow corners,” Brabham reported.

“I felt like we were quite quick everywhere else except for the two slow corners, so we’ve got to sort those out somehow and we’ll keep working at it.”