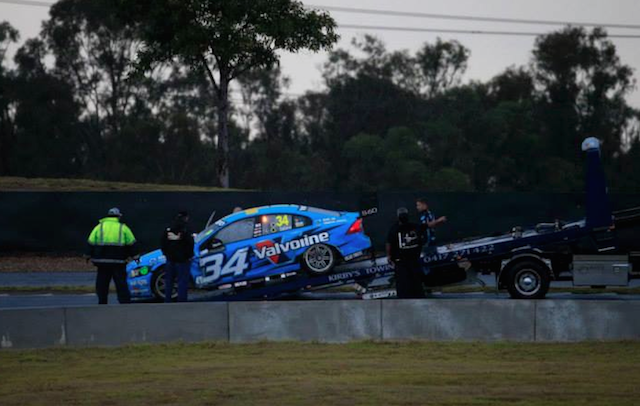 The V8 Supercars Championship field is down to 23 cars for the remainder of the Sydney Motorsport Park 400 with Volvo Polestar Racing’s Robert Dahlgren joining Walkinshaw Racing’s Tim Slade on the sidelines.

The Swede’s S60 has been withdrawn after it suffered front and rear chassis damage in a clash with the concrete at the exit of Turn 5 during Race 27.

Dahlgren had lost control of the car while battling for position with Jack Perkins, spinning into the inside wall.

“It’s done front and rear damage, but the rear is significant enough that we can’t fix it at the track,” team manager Dean Cowling confirmed to Speedcafe.com.

The incident completed a horror day for the Volvo team after an engine failure and loose wheel curtailed Scott McLaughlin’s efforts in the two races.

While McLaughlin is again expected to be a contender in today’s 200km race, the team is reassessing its pre-Sandown 500 testing plans due to the damage on Dahlgren’s car.

The squad had planned to test at Winton with the majority of the Victorian outfits on September 1.

Dahlgren’s chassis will be transported back to Melbourne later this afternoon so that GRM’s crew can start work on it as soon as possible.

The importance of the pre-endurance season test may see the team use its final private hit-out of the season with just one car if Dahlgren’s cannot be fixed in time.

“I’m pretty keen on getting at least one car out there but we’ll have to weigh it all up,” said Cowling.

“It would be a shame to use a test day with one but it’s all the crucial stuff you need to do before the endurance season that we want to run through.

“We’ll make a call on it closer to the day.”