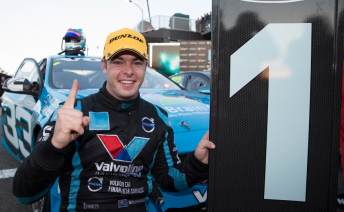 Scott McLaughlin managed to fend off Nick Percat in the closing stages to earn Volvo its second V8 Supercars victory of the season in Race 28 at the Sydney Motorsport Park 400.

The talented Kiwi produced one of the drives of his career as he controlled the 200km race from start to finish while remaining cool under pressure from a hard charging Percat in the closing laps.

Percat had closed the gap to the Volvo to just three tenths at the chequered flag as he secured his first career individual V8 Supercars podium finish.

Soft tyre shod James Courtney made the most of his rubber to storm to the front with a lightning getaway from the start. Polesitter McLaughlin followed the HRT driver in second with Coulthard in third ahead of Whincup.

While the field navigated the first corner without problems, Ford Performance Racing’s Chaz Mostert ran wide at Turn 2, which saw him drop down the order.

Just seconds later his team-mate Mark Winterbottom bumped David Reynolds, who in turn made contact with Dick Johnson Racing’s Scott Pye. The initial contact sent Reynolds and Pye hard into the concrete wall and out of the race.

Winterbottom was handed a drive through penalty for his involvement in the incident.

The crash brought out the Safety Car prompting the entire field to come in to the pits with the six soft tyre runners electing to change to hard tyres.

McLaughlin reclaimed the lead in the pits ahead of Courtney with Percat and Whincup ahead of Coulthard and Race 26 and 27 winner Shane van Gisbergen.

But the order soon changed when Percat slid underneath a slowing Courtney for second. The early race leader was forced to retire shortly after, having dropped oil on the circuit with a gearbox issue.

At the front, McLaughlin moved into a 3.5 second lead from Percat, Nissan Motorsport’s Moffat and Whincup at the end of lap 20. Title rivals Lowndes and Winterbottom were 15th and 20th as a result of their qualifying and race dramas.

The battles raged further down the field with Coulthard and van Gisbergen disputing sixth spot while Nissan’s Michael Caruso turned Holden’s Garth Tander around while fighting over ninth position.

McLaughlin continued to lead after the second round of stops as he rejoined the race at the front after his lap 31 visit to the pits.

Percat held on to second but there was an almighty battle for third with Moffat briefly passing Coulthard before the Kiwi returned the favour next time they headed into Turn 1.

Bright, Whincup and van Gisbergen were all watching briefs just behind.

While there was plenty of action behind, McLaughlin seemed in control with a 5.5 second lead over Percat.

With just 10 laps remaining, Coulthard and Percat began to claw back McLaughlin’s advantage as he began to manage his tyres.

In the end, Percat produced a relentless challenge to close the gap but McLaughlin held on to take his second victory of the season.

Coulthard completed the podium in third just ahead of Moffat and Whincup, who passed Bright for fifth on the final lap.

Lowndes fought valiantly to finish in ninth having started from last on the grid.

Problems with tyre wear forced Winterbottom into the pis with eight laps remaining which ultimately dropped him to 20th at the flag.

Supercheap Auto Racing’s Tim Slade and Volvo’s Robert Dahlgren failed to make the start as a result of damage accrued from Race 26 and Race 27 respectively.