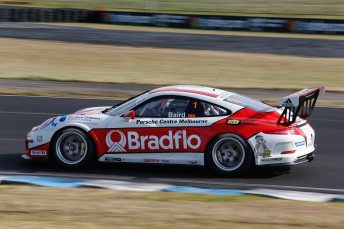 Baird has a win in the wet and the dry

Multiple Carrera Cup champion Craig Baird has made it two-from-two with victory in the Sunday morning race at Sydney Motorsport Park.

After coming from seventh on the grid in a wet opening race, Baird was forced to start this morning’s dry race from fourth after a parc ferme infringement yesterday.

With damp patches still on the track, Baird got a great start after Michael Patrizi crept from pole. Heading into the opening lap Steven Richards got the lead ahead of Baird, with Patrizi continuing with a 5-second time penalty.

A dramatic moment came on the first lap when winner of Elite Class in Race #1, Tony Bates, went around while racing for seventh with Nick Foster.

An early Safety Car on lap #4 of 14 for Elite Class points leader Stephen Grove was called after contact with Duvashen Padayachee and was left stranded at Turn #2.

After the re-start Baird made a lunge on Richards and took the lead. Patrizi tried to make the most of the situation but ended up spinning when he made contact with Warren Luff.

From that point Baird controlled proceedings while Luff closed-in on Richards. Despite showing his nose throughout the final laps, Richards held onto second and edged further in front of Luff in the points chase.

The final Carrera Cup race will be run at 2.35pm this afternoon.