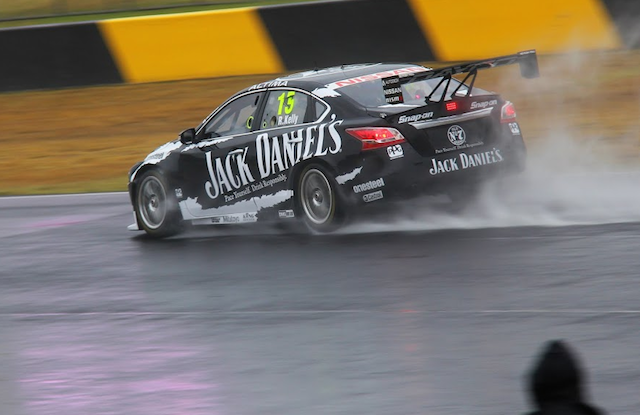 The possibility of the first wet V8 Supercars Championship race in almost three years threatens to throw an extra variable into a challenging day for teams at Sydney Motorsport Park.

The V8 Supercars will contest six sessions across the day, with two 30 minute practice sessions preceding two 10 minute qualifying hit-outs and a pair of 100km races.

The two-day meeting’s compacted schedule makes today one of the hardest of the season for teams, with track running starting at 0900 and ending after 1700.

While weather forecasts for the weekend have improved in recent days, scattered showers are still predicted to hit the region throughout the day.

The only wet race for the Next Generation V8 Supercars came in March last year at Albert Park, which was dominated by Tekno Autosports’ Shane van Gisbergen.

A points race has meanwhile not been significantly wet weather-affected since Sandown, 2011, where Jack Daniel’s Racing’s Rick Kelly scored an unexpected victory.

“It’s certainly got the potential to throw up an unusual result,” Erebus general manager Ross Stone told Speedcafe.com of the weather.

“A mixed day will really put pressure on the decisions you make with the set-up before each session, as well as managing how each one plays out.

“If you have changeable conditions in qualifying you’ve just got to be out there at the right time.

“Even when it looks fully wet, there’s always a time in the session where all the best laps get done.

“It’s such a long time since we’ve had a wet championship race that it would be a real challenge for everyone.”

Red Bull Racing Australia’s championship leader Jamie Whincup is on a run of six wins in nine races and arguably has the most to lose from a chaotic day.

“It’s going to be an engineering nightmare, but it’s the same for everyone so we’ll just have to do a better job than everyone else,” he said.

While such history is unlikely to have a direct bearing on this weekend, the team’s under-powered Nissans could benefit greatly from rain.

“Earlier in the year we were pretty happy with our pace here,” said the squad’s general manager, Scott Sinclair, of February’s weather-hit pre-season test.

“This team has traditionally gone well in the rain but whether that relates to this weekend, we’ll have to wait and see.

“This circuit has some characteristics that are similar to the grand prix (Albert Park), where we were pretty strong, but we’ve all been around long enough not to be making any big predictions.”

In addition to the pressure that the schedule will put on clear decision making from drivers and engineers, Sinclair admits that wet running poses unique challenges.

“It’s all the stuff that you need to be onto before the endurance races,” said Sinclair.

“We haven’t used the wipers for a long time and you need to be on top of all those little things if the weather comes in.”

Two-day weather forecast from the Bureau of Meteorology