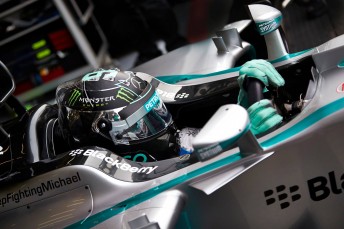 The championship leader was once again involved in a head-to-head battle with his Mercedes team-mate, but stayed cool under pressure to secure his fourth consecutive pole with a 2.05.591s effort on a slippery track.

Hamilton was left to rue costly errors at La Source and the Bus stop chicane on flying laps, where he had been quicker than Rosberg earlier in Q3, as he trailed his team-mate by two tenths.

Meanwhile, Red Bull Racing’s Sebastian Vettel put his engine problems from Friday free practice behind him to secure third place on the grid.

The reigning world champion, who the Belgian Grand Prix last year, was more than two seconds adrift of Rosberg.

A wet track greeted the drivers at the start of qualifying but by the time Q3 began sunny spells saw the track start to dry.

Ferrari’s Fernando Alonso came through to snatch fourth while Daniel Ricciardo was fifth. The Western Australian was on course to secure third but a mistake at the ultra fast run towards the Bus Stop chicane proved to be the deciding factor.

Williams‘ Valtteri Bottas could only post a time good enough for sixth ahead of McLaren’s Kevin Magnussen and Ferrari’s Spa ace Kimi Raikkonen.

Felipe Massa and Jenson Button rounded out the top 10 with the experienced pair unable to find the required pace.

Toro Rosso’s Daniil Kvyat narrowly missed out on securing a spot in the pole position shootout after being pipped to the top 10 by late efforts from Vettel and Button.

After impressing to qualify for Q2, Marussia’s Jules Bianchi could only secure 16th spot.

Force India’s Nico Hulkenberg produced the biggest surprise in Q1 as he failed to progress to Q2 for the first time since the 2012 Italian Grand Prix. The German will start Sunday’s race from 18th just behind Lotus‘ Pastor Maldonado.