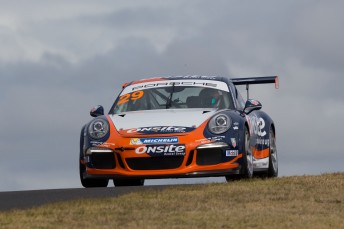 Michael Patrizi has set the fastest time in practice ahead of this weekend’s fifth round of the Carrera Cup Series at Sydney Motorsport Park.

The second practice got underway 10 minutes late after the previous Touring Car Masters session saw one of the cars put oil down on the track. The slick conditions meant the first half of the 20-minute Carrera Cup session was slower than the first before the track came to life late. 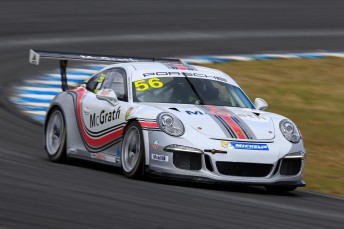 Shane Smollen was quickest of the Elite runner

Patrizi posted the fastest time in the dying seconds from Luff and Nick McBride.

“We have been fast since Townsville and the car is in the window here in Sydney,” said Patrizi.

“I actually made a change for the second session and I didn’t think it felt as good as the first practice. So we will go back in that direction for qualifying and I’m sure we can find even more time.”

Fastest in the elite group was Shane Smollen with Roger Lago and Stephen Grove also on the pace.

“Probably the best opening practice sessions we have had this year,” said Smollen.

“It’s important to now carry that through into tomorrow.

“The weather earlier this week in Sydney was poor, plus the oil from the previous session also meant there was little grip out there. However, everyone had the same conditions and we were able to get the most out of the car.”

The Carrera Cup will see qualifying in the morning with the opening race of the weekend in between the two V8 Supercar races.

See below for  Carrera Cup  Practice 1

See below for Carrera Cup Practice 2