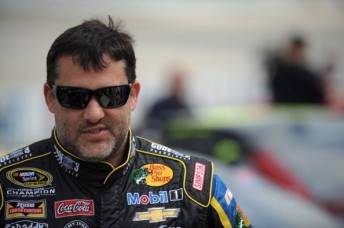 Three-time NASCAR champion Tony Stewart has withdrawn from the IRWIN Tools night race at Bristol this weekend as talk of a possible retirement intensifies.

The #14 Chevrolet will again be piloted by veteran Jeff Burton, who also stepped into the seat at Michigan last weekend.

Stewart was replaced by Nationwide Series regular Regan Smith at Watkins Glen on the same weekend he was involved in a sprint car incident which claimed the life of Kevin Ward jr at the Canandaigua Motorsports Park dirt track in upstate New York.

A police investigation into the incident continues as Stewart’s racing future remains unclear.

As was the case prior to Michigan, Stewart’s team has stated that the change only relates to Bristol although it has not divulged plans in the near future.

Stewart-Haas Racing says that it will leave the decision on whether Stewart makes a return to racing to the driver.

Stewart’s other racing plans including pending speedway events have also been shelved.

He remains 25th on points, well outside the requirements to secure a spot in the Chase which this year features 16 drivers under a revised format.

Burton finished 37th at Michigan in the #14 Chevrolet after getting caught up in an incident triggered by team-mate Danica Patrick.