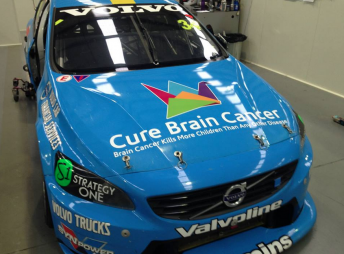 The Cure Brain Cancer branding will feature on the bonnets of the Scott McLaughlin and Robert Dahlgren driven entries.

The move comes as part of a four-year relationship with the foundation, which sees $50 from every Volvo sold in Australia donated to the charity.

The two parties recently celebrated $1 million worth of donations at a function in Sydney.

The charity’s previous name, Cure for Life, was used on the Volvo’s at the pre-season Sydney Motorsport Park test day.

“It is truly a terrible disease that kills both children and adults in the prime of their life.

“We respect and admire the dedication and innovative work of the Cure Brain Cancer team, and our partnership is going from strength to strength.”

Founded in 2001, the foundation is the largest dedicated fundraiser for cancer research in Australia.

The factory Volvos have been without full-time bonnet sponsors this season.