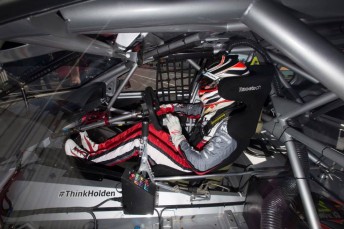 Garth Tander will give the Holden Racing Team’s latest V8 Supercar a shakedown today ahead of its debut at Sydney Motorsport Park this weekend.

The chassis, codenamed WR 021, has been built up by the Melbourne-based crew over recent months and is being pressed into service as part of the team’s development cycle.

Tander’s latest chassis and the existing car of team-mate James Courtney will both be sporting an upgrade in Sydney that was first run by Tim Slade last time out at Queensland Raceway.

The car formally campaigned by Tander, WR 019, will subsequently receive the same upgrade in time for Nick Percat and Oliver Gavin to use it at September’s Wilson Security Sandown 500.

Percat’s current chassis (WR 018), which was purchased back from Tony D’Alberto Racing at the end of last year, will in turn be relegated to a spare.

Walkinshaw Racing managing director Adrian Burgess says that the planned cycling of the chassis is the most efficient way of improving all cars as soon as possible.

“We’ve been building the new chassis up for a while so it wasn’t a rush to get it ready,” he told Speedcafe.com ahead of the shakedown.

“When we knew we were trying to implement the mod around this period, we worked out the best way of implementing it across all four drivers. 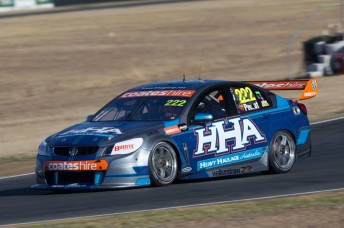 “(The update) is just something we wanted to look at from very early on, but you can’t do everything all at once, you’ve got to work through them.

“We’re at the point where this is the most bang for our buck.”

The HRT transporter will exit the team’s Clayton workshop this morning, stopping for WR 021’s 60km shakedown run at Winton, before heading to Sydney Motorsport Park.

Burgess says that the two-day format at SMP, which sees first practice run Saturday morning, will be beneficial to the squad’s unusual build-up.

“We’re lucky that this weekend is only really a Saturday-Sunday meeting,” he said.

“We have a couple of things to do on the Friday, like the ride session, but it basically gives us another day (of preparation).

“Doing the shakedown and then the ride session on Friday means that if there are any issues there’ll be plenty of time to sort them before Practice 1.”

While the V8 Supercars are only on track for two days at SMP, sessions for the Australian GT Championship, Radical Australia Cup, Carrera Cup Australia and Touring Car Masters will all take place on Friday.