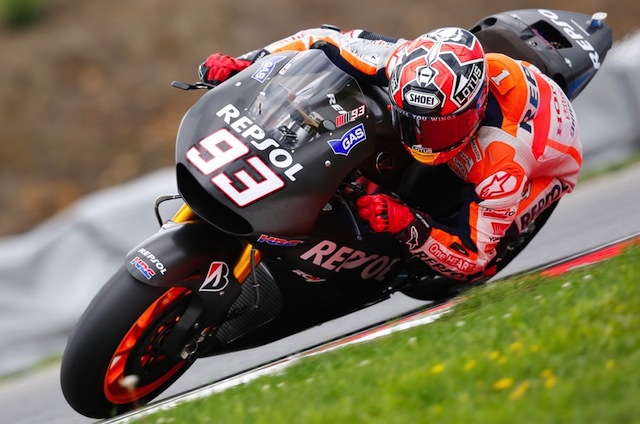 Honda’s Marc Marquez topped the timesheets in the post Czech Republic Grand Prix test at Brno as teams worked on developing components for next season.

The reigning world champion, who witnessed his 100 percent race winning run come to end just 24 hours earlier, posted a session best 1m55.411s on a drying track in the final hour of the test to topple Jorge Lorenzo. The Yamaha rider was just 0.155s adrift having held the top spot for the majority of the day.

Brno race winner Dani Pedrosa was third fastest as both he and Marquez concentrated on developing parts for this year’s bike, while also working on revised 2015 spec machines.

Meanwhile, Yamaha fielded 2014 spec bikes with new prototype engines for Lorenzo and seven-time MotoGP world champion team-mate Valentino Rossi, who ended the test in fifth position. The team also ran a prototype chassis which was shared between the two riders during the day.

Forward Yamaha’s Aleix Espargaro split the works Yamaha’s to slide into fourth spot as he allocated the test to developing setups, while trialling a new electronics package.

Nine time MotoGP race winner Loris Capirossi made a rare return to the track as he sampled Forward Yamaha, NGM Yamaha and Cardion Honda machines in his role as Bridgestone Safety Advisor.

British rider Leon Camier continued to deputise for injured Nicky Hayden with the team confirming the former British Superbike champion will remain in the seat for the British Grand Prix at the end of the month. Hayden had been expected to return for the race at Silverstone.