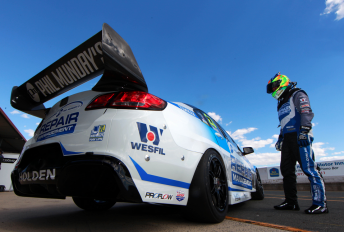 Russell Ingall with his LDM Holden

Former V8 Supercars champion Russell Ingall believes that the two-day event format set to be used at Sydney Motorsport Park this weekend should become commonplace in 2015.

Although a three-day meeting for the support classes, first practice for the V8 Supercars at the Western Sydney venue will not take place until Saturday morning.

The Saturday schedule will see two 30 minute practice sessions prior to qualifying; providing the same total practice time as that on offer with the usual three, 20 minute Friday hit-outs.

A similar format was used the last time the V8 Supercars visited SMP in 2012.

Queensland Raceway and Phillip Island were last year initially scheduled as two-day meetings before a decision was made to reinstate Friday at both events.

“It’s something I have lobbied for years and I am glad to see V8 Supercars are finally going to give it a trial,” Ingall said of the two-day format.

“There is no reason why we have to run on Friday and I personally would rather pack more into the two days and give the fans a bigger bang for their buck and also help with cost savings for the teams.

“Later down the road I would like to see every race, except for the large events, to be run over two days and then maybe add a couple more races to the calendar instead.”

Ingall is this year driving for the smallest team on the V8 Supercars grid, Lucas Dumbrell Motorsport, and sits 19th in points after 25 races.

The category’s deal with the broadcaster will see every V8 Supercars session shown live, as well as every support category race.

Regardless of track sessions, Friday telecasts will likely be heavily padded with feature and interview content.

“There’s an enormous amount planned for the early end of the weekend in terms of Fox Sports coverage in particular which comes in day before, sometimes two days before the free-to-air currently, so there’s a lot to consider from 2015 and beyond,” V8 Supercars CEO James Warburton said earlier this year.

“It’s not just about on-track action. There’s a lot of it about continuity of pre-round shows and post round shows and Motorsport 360-type shows, so its actually about the platform.

“It’s not just about cars practicing on the track. It’s about the whole ethos of the sport and the drivers the teams and a lot of the activity and action which clearly the fans are interested in as well.”

The V8 Supercars will briefly take to the track for a ride session on Friday afternoon, while the majority are scheduled to remain at the circuit for a full day of rides on Monday.