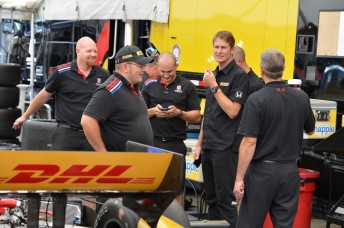 Ryan Hunter-Reay talking to his Andretti crew at Milwaukee

The rehiring of Hunter-Reay to the Michael Andretti-run team came at the same time primary sponsor DHL confirmed an extension to his already four-year long association with the #28 machine.

Hunter-Reay, who claimed the IndyCar Series title in 2012, confirmed his deal as the 33-year-old cemented third place in the current standings with two races remaining.

“To think back on my career and how far it has come, I know that DHL and Andretti Autosport have been instrumental in great achievements,” Hunter-Reay said.

“I’m happy to call both organisations family and proud of how we have grown together over the past years.”
Hunter-Reay has accumulated 14 wins from 166 IndyCar/Champ Car starts.