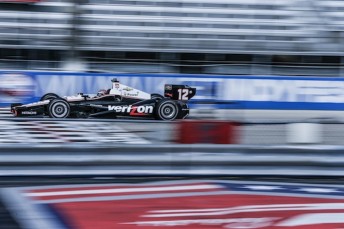 Will Power claims pole at the Milwaukee Mile

Penske driver Will Power unleashed an electrifying lap to ace the field and claim a vital bonus point ahead of the Wisconsin 250 at the Milwaukee Mile circuit.

Power commenced the third last round of the IndyCar Series in bristling form to clinch the pole after a two lap average of 169.262mph (272.40km/h).

The scorching effort was built on a withering final lap which saw the Toowoomba star the only driver to top 169mph.

It was the two-time 2014 race winner Power’s third Verizon pole award of the season.

Searching for his maiden IndyCar title, Power heads into the race with a five-point lead over his team-mate Helio Castroneves who will start from eighth position.

Crucially, Power feels that track position for the 250-lap race will be pivotal.

Ganassi driver, Tony Kanaan, continued his solid form and will start from
second after an average of 168.662mph (271.44km/h). 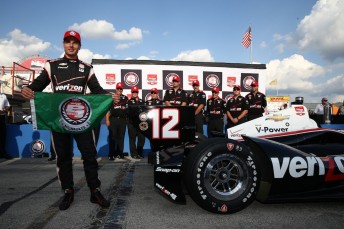 Josef Newgarden was the best of the Honda-powered runners and will start out of fifth.

Title contenders Simon Pagenaud and Ryan Hunter-Reay had miserable qualifying runs and will start from 16th and 19th respectively.

Oval track specialist Ed Carpenter, who has announced plans to  merge with Fisher Hartman next season in what will be known as CFH Racing), was seventh fastest.

Andretti Autosport’s best was Marco Andretti, ninth fastest, while James Hinchcliffe who had set the pace in final practice before a heavy shunt at turn two will start from 13th.

Veach’s team-mate Matthew Brabham will start from third after just edging SPM driver Luiz Razia as the Australian recovered from a slide on his first flying lap.

*Stay tuned for the latest IndyCar news on Speedcafe.com

See below for final Milwaukee qualifying