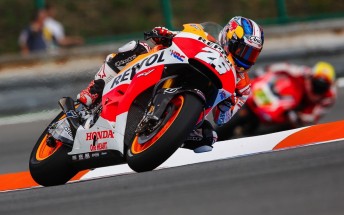 Honda’s Dani Pedrosa brought Marc Marquez’s 10 race winning run to an end with an impressive ride to victory in the Czech Republic Grand Prix at Brno.

The Spaniard managed to fight off a hard charging Yamaha of Jorge Lorenzo to claim his first win since the 2013 Malaysian Grand Prix.

Pedrosa was forced to work hard for the win having had to fight through the field and hold off Lorenzo for the majority of the encounter.

Reigning world champion Marquez, who was aiming for his 11th consecutive victory of the season, struggled throughout despite starting from pole.

The Honda man battled to third spot but a late race slump saw him relinquish his winning run and the final place on the podium to Yamaha’s Valentino Rossi.

The result was the first time the reigning world champion has finished a MotoGP race outside of the top three positions.

Polesitter Marquez was slow away from the line as he dropped to as low as sixth on the opening lap while Andrea Iannone led the field into Turn 1.

Ducati’s Andrea Dovizioso slotted into second with Pedrosa third, ahead of the Yamaha’s of Lorenzo and Rossi just behind.

Lorenzo starred in the early stages with the double world champion taking the lead on the second lap having passed Pedrosa, Dovizioso and Iannone in just a couple of corners.

Pedrosa soon moved into second as he began to reel in Lorenzo, while Marquez jumped into third after dealing with Rossi, Dovizioso and Iannone. He was lucky to escape a dice with the latter unscathed after the pair made contact twice as the battle for third intensified.

Meanwhile at the front Pedrosa continued to apply pressure on Lorenzo which eventually took its toll as the Honda man slid into the lead on lap five.

Once in front, Pedrosa quickly opened up a lead while Marquez started to home in on Lorenzo in second.

As the race reached the final 10 laps, Marquez began to drop off the back of Lorenzo and fell into the clutches of Rossi. It wasn’t long before the seven-time MotoGP world champion picked off the championship leader.

At the front Pedrosa seemed in control as he went on to take the chequered flag comfortably from Lorenzo and Rossi.

Marquez was forced to settle for fourth ahead of early pacesetters Iannone and Dovizioso. 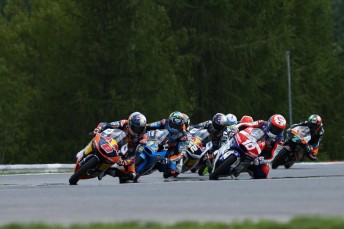 Jack Miller involved in a close battle at Brno

In Moto3, Queenslander Jack Miller extended his championship lead to 23 points with a fifth place finish in Brno.

“On the last chicane I had a good position, but I made a small mistake on the corner leading onto the straight and lost four places,” said Miller.

“The race could have gone better, but we should be happy because we have extended the lead in the Moto3 World Championship standings by two points.

“Step-by-step we are improving. We must be satisfied with the weekend.

“We suffered but, in the end, we had the chance to fight for the victory, which would have been great. Now we need to focus on Silverstone, which is a good track for me.”