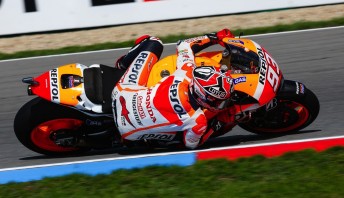 The reigning MotoGP world champion faced one of his toughest qualifying battles of the season as Pramac Ducati rider Iannone grabbed provisional pole in the dying minutes.

In the end, Marquez dug deep and on his second response he came through to eclipse Iannone’s time to secure pole.

Fresh from signing a new contract with Monster Yamaha this week, Bradley Smith was the top Yamaha rider in fourth position only 0.145s adrift of Marquez’s time.

The Brit will start just ahead of Honda’s Dani Pedrosa.

The session proved to be a tough one for Yamaha in general with Jorge Lorenzo and Valentino Rossi only able to qualify in sixth and seventh respectively.

Double world campion Lorenzo had been lying in 11th position before his last ditch effort, while team-mate Rossi, who crashed heavily in free practice four, required a precautionary x-ray and medical clearance before he could take part in qualifying.

Having come through Q1, Stefan Bradl claimed eighth spot for LCR Honda ahead of Monster Yamaha’s Pol Espargaro, while Aleix Espargaro rounded out the top 10 for Forward Yamaha.

Australia’s Broc Parkes will start from 23rd on the grid for Paul Bird Motorsport.

Meanwhile in Moto3, Townsville sensation Jack Miller will start from sixth on the grid after an eventful qualifying session.

Philipp Oetti brought out the red flags following a nasty accident with just 10 minutes remaining. The impact forced the session to be delayed while repairs were made to the catch fencing at the area of impact.

Miller’s title rival Alex Marquez will start from pole position with the Aussie just four tenths behind the Spaniard.