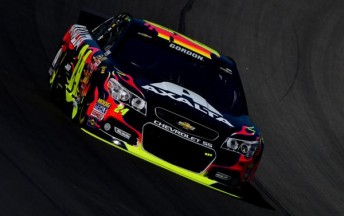 Gordon scored his 76th career pole and sixth at Michigan

Evergreen NASCAR superstar Jeff Gordon has backed-up his pole position performance on the road course at Watkins Glen with the fastest time in qualifying at the 2-mile Michigan International Speedway today.

“That thing stuck so well,” said Gordon who scored his 76th career pole.

“That makes it fun.”

“We made a qualifying effort in practice that didn’t go so well, then we made another one and it wasn’t bad. I wasn’t sure what I was gonna have when we rolled out here for qualifying, but the first lap was just really, really good.

“I felt like I needed to be more aggressive, and the next two runs, I was able to be aggressive and those guys made great adjustments.”

It was not a Hendrick Motorsports domination with Kasey Kahne in 15th, while Dale Earnhardt Jr. will start 25th and Jimmie Johnson back in 30th.

Marcos Ambrose, who is looking to keep his Chase for the Sprint Cup hopes alive, will start from 20th.

“We aren’t there yet, but we’re closer,” said Ambrose.

“We are tight, but the car is fast.  If we can get the setup better, we’ll be fine for Sunday.

“It’s important to have horsepower here, and we have that.  Our final run, we just got too tight, and I just shut it off.  We are in the show and will get ready to race.”

The Pure Michigan 400 will be run Monday morning Australian time.