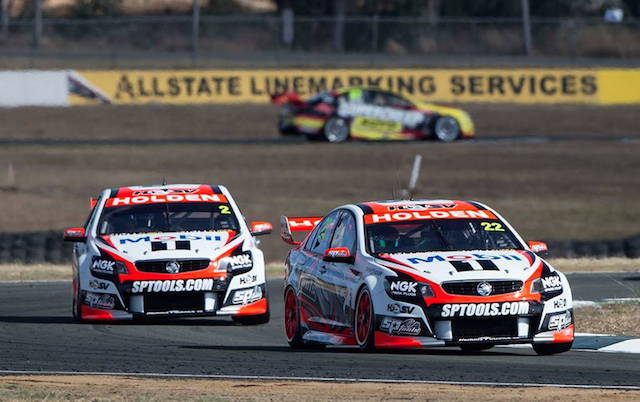 Holden has finally confirmed its continued support of the Holden Racing Team beyond the end of the 2014 season.

Announcement of the extension comes more than three months after a similar agreement with Triple Eight was made public by the manufacturer.

The HRT has also lagged behind Triple Eight on-track in recent years, but is currently showing signs of improvement amid a rebuilding phase under the direction of Adrian Burgess.

Described simply as a ‘multi-year’ deal, the contract is thought to mirror the two-year arrangement struck with Triple Eight, falling into line with the scheduled end of local Holden production in 2017.

The shutdown timing is currently the subject of debate, however, with Holden chairman Gerry Dorizas warning on Wednesday that the Federal Government’s plan to cut $500 million in funding from the automotive manufacturing sector could lead to an earlier closure.

Regardless, Holden’s recommitment to the HRT is a positive sign for V8 Supercars as the General Motors brand moves towards its all-import future.

Next year will mark the 25th anniversary since the late Tom Walkinshaw was awarded the contract to run the HRT by Holden.

Walkinshaw’s widow Martine assumed ownership of the TWR empire when its founder passed away in 2010, while son Ryan stepped into the role of director.

“My dad started the Holden Racing Team 24 years ago and our family is hugely passionate about HRT, so we are fortunate to have a new, multi-year contract with Holden,” said Ryan Walkinshaw.

“Our new deal gives us the opportunity as a team to celebrate our 25th anniversary with our loyal partners and fans, which is exciting.

“Our relationship with Holden extends further than just the race team, and Holden has been a great supporter of my father and our family.

“Hopefully we can repay Holden’s faith with more race wins and championships.”

“Motorsport is part of Holden’s DNA, having raced its products in Australia and overseas with great success for more than 45 years,” he said.

“We’re incredibly proud of the Holden Racing Team — and the success we’ve built together in this sport.

“We’re certainly looking forward to working hard together over the next few years for more race wins and championships.”

Walkinshaw and Triple Eight are again the only two Holden teams expected to receive cash from the manufacturer next season, with others supported via parts and panel programs.