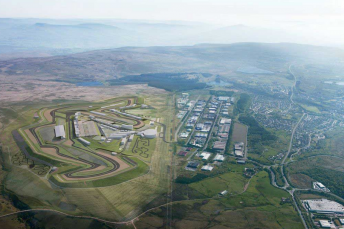 A new circuit in Wales is set to join the MotoGP world championship after signing a five-year-old contract with a further five-year option to extend.

The sticking point is that the circuit at Ebbw Vale is yet to be built which means the British leg of the MotoGP calendar may remain at Silverstone or return to Donington in 2015.

“MotoGP is the pinnacle of global motorcycle racing and expectations within the series and of its millions of fans worldwide are for a truly world class event at iconic and state-of-the art venues.

“We look forward to meeting those expectations when we welcome MotoGP to Wales from 2016 and we are now working closely with Dorna and the FIM, MotoGP’s governing body, with regard to the 2015 British round of the MotoGP World Championship.”

Carmelo Ezpeleta, the chief executive of Dorna Sport, said MotoGP was a vital part in the regeneration of the Blaenau Gwent area in Wales.

“The commitment to MotoGP is obviously a catalyst to a wide range of exciting projects aimed at contributing to the regeneration of the area, while we work together with MotoGP governing body the FIM in relation to the full homologation of the circuit.”

The circuit is a $502 million development that will become the hub of the large British motorsport industry.

The first phase of the multi-purpose development will be the construction of an international specification motor racing circuit and world championship facilities, hotel, commercial and retail complexes.