Rising V8 Supercars stars Andre Heimgartner and Jack Le Brocq are behind the wheel of the category’s prototype cars this week for its five-day aerodynamic test.

As previously reported, V8 Supercars is experimenting with revised testing procedures following research from the aerodynamic working group it established in March.

While recent years have seen homologation running undertaken at the East Sale RAAF base in Victoria, this week’s evaluations are taking place at the Army Aviation Airfield in Oakey, Queensland.

Cited by V8 Supercars as being more convenient for its Queensland-based technical staff, the Oakey airfield saw V8 Supercars action as recently as last year, when Erebus utilised the venue for private evaluations.

This week’s process is being overseen by V8 Supercars’ recently appointed technical and sporting director David Stuart, with the cars run by Matt Stone Racing and championship staff.

A V8 Supercars spokesman told Speedcafe.com that the category has been pleased with work undertaken during the opening two days of running.

“The progress report is that we’ve had two good days so far and all is going well,” said the spokesman.

Heimgartner and Le Brocq are both full-timers in the Dunlop Series, with the former also slated to join Super Black Racing for its Bathurst wildcard entry.

Le Brocq previously completed straightline work for V8 Supercars in June, 2012, when the category undertook initial Car of the Future aero testing between the Falcon FG and then VE-bodied Commodore. 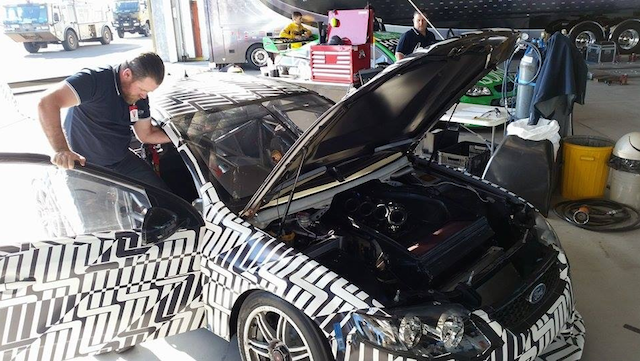 The prototype Falcon is back in action following the January test

Notably, V8 Supercars is not ruling out more homologation testing later this year, pending the results of this week’s hit-out.

The revised Nissan and new-for-2014 Volvo were both homologated during the troubled January, 2014 aero test against the unchanged baseline Falcon.

The Holden and Mercedes-Benz were both absent from the January test, having had their specifications locked in alongside the Falcon and first-iteration Nissan the previous year.

The Ford Falcon may need a post-season rehomologation regardless of this week’s testing outcome if the manufacturer gives the soon-to-be-released upgraded model the green light for racing.

The prototype Holden being used this week remains in the Xbox livery that it was given for a filming day at Morgan Park in October, 2013, but is not the Triple Eight Xbox chassis fielded for Mattias Ekstrom and Andy Priaulx at last year’s Bathurst 1000.

The Triple Eight Xbox car was the first Car of the Future chassis built by the team and, having only raced once, is retained in Red Bull colours as the squad’s ride car.

A new Triple Eight chassis will meanwhile take to Norwell this week for a shakedown ahead of a planned debut in the hands of Craig Lowndes and Steven Richards at September’s Sandown 500.

The team rolled out a new car for Jamie Whincup at Sandown last year, while Lowndes remains in the chassis he has raced since the opening event of 2013.

Volvo Polestar Racing has also been on track this week, taking to Winton yesterday (Tuesday) for its second private test day of the year.

Joined at the two-car test by team-mate Robert Dahlgren and the Swede’s enduro co-driver Greg Ritter, Scott McLaughlin reported a positive day of set-up experimentation for the team.

“We learnt a heap and it was perfect weather all day,” he Tweeted. “Bring on Sydney.” 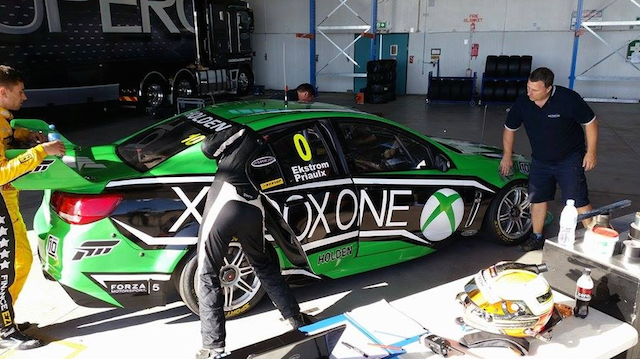