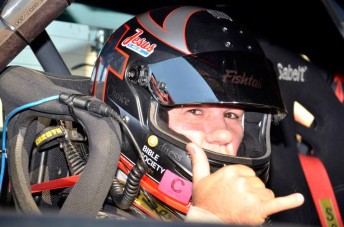 The 47-year-old Fisher hopes that adding TCM to his schedule will prove a strong fit for both his driving style and the Jesus message.

QUESTION: Andrew, after several years and lots of success in the V8 Utes, what has the deciding factor in making the move to Enzed Touring Car Masters next weekend?

ANDREW FISHER: TCM is a great category that is very popular with the fans. I speak to 1000s of men at dinners across Australia and the TCM style cars are a perfect fit with the programs we run.

We recently launched our replica XY GT and took this to a number of high schools as part of the Jesus Racing. Life. Choices. program and we were amazed at the response it received from the younger generation.

I personally thought they might struggle to connect but both the guys and the girls absolutely loved the machine, the livery and the sound of our exhaust!

I’ve also been a long term fan (of TCM). Where else do you get the chance to race with legends of the sport like Jim Richards, John Bowe, Andrew Miedecke, Greg Crick and others?

QUESTION: TCM Cars are almost as heavy as the Utes and have more grunt, but fundamentally there are a lot of similarities between what you are accustomed to driving and the TCM Falcon. How have you adapted? 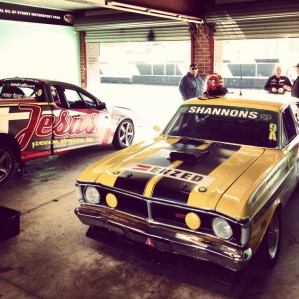 The XY Fisher will race in the TCM, alongside his V8 Ute during a recent test day

FISHER: The V8 Utes weigh about 1,850Kg, they run on an R-spec tyre with fairly small brake package so they are the most difficult car to race on the limit and the competition is fierce with the top 20 usually being covered by less than one second.

The XY GT is also a pretty heavy race car, but the ability you have to set up the car to your requirements is a huge benefit and the smile you get when you unleash the horsepower is amazing.

I think my advantage compared to other new drivers entering the category (TCM) is that I am used to managing the mass of the car when you rotate into the corner and also the fact that both have leaf-spring rear suspension, which can often lead to axle tramp under braking. I’m used to managing that.

The biggest thing I have had to learn is the adjustable brake bias we have in the GT and I’ve been learning what that does and how it feels.

QUESTION: You tested at Sydney Motorsport Park recently. How did it go?

FISHER: The test day went well, the car has been sitting on the sidelines for the past few years and owner Steve Makarios contacted us earlier this year about blowing of the cobwebs and giving it a run.

It is does not have the horsepower and torque of some of the front running cars but it has been lovingly built by Steve who builds the best engines in the category which means it is strong and reliable.

We have been able to adapt the car to my liking behind the wheel and we seemed to set some reasonable lap times when we tested the car recently.

QUESTION: What are the expectations? You’re entering a competitive category with a group of experienced drivers in very well-developed cars so it’s not going to be easy..

FISHER: It is always difficult to predict what is going to happen at a race weekend, I would like to think we will be on the pace of the frontrunners, but as with the Utes we have to recognise that the guys that run at the front of the category are at the top of their game and are racing cars that are well sorted, reliable and familiar to them so we don’t expect any miracles.