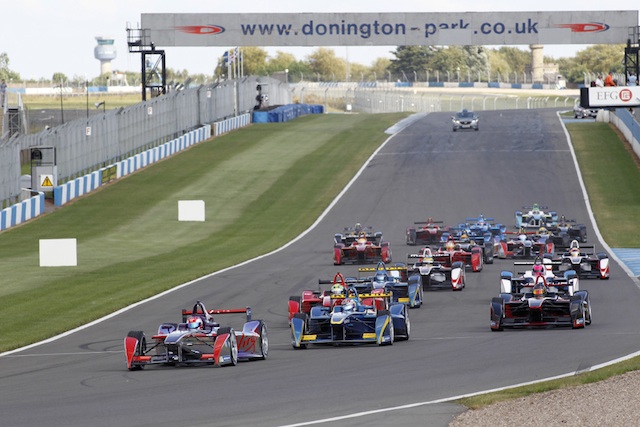 The FIA Formula E Championship stepped up preparations ahead of its inaugural event by hosting an event weekend simulation at Donington Park.

The revolutionary all-electric single seater series ran through the procedures slated on a race weekend in a bid to iron out any teething issues before the launch of the championship in Beijing on September 13.

All 10 teams took part in a full dress rehearsal of a race weekend, which included practice and qualifying sessions, along with two race simulations.

The simulations included the mandatory car swaps each driver will complete during a race.

The teams have been working towards completing a car swap procedure inside a minute.

It was also the first time that teams ran their respective four cars which will be used at every meeting.

Although the series admitted there were some issues, Formula E CEO Alejandro Agag declared the simulation a success.

“Putting on a major sporting event in the heart of cities around the world is a massive undertaking and requires careful preparation,” said Agag.

“We want the Formula E Beijing ePrix to be a fantastic spectacle, which is why we’re leaving nothing to chance by rigorously testing all the systems beforehand.

The championship, which will visit 10 city street circuits in its inaugural season, has also revealed its race weekend schedule.

Drivers will take part in two practice sessions before being split into four qualifying groups. Each qualifying group will complete a 10 minute session to determine grid positions for one scheduled race to be held at each round.

The FIA Formula E will conduct one final official test at Donington Park on August 19 before the season kicks off in China.