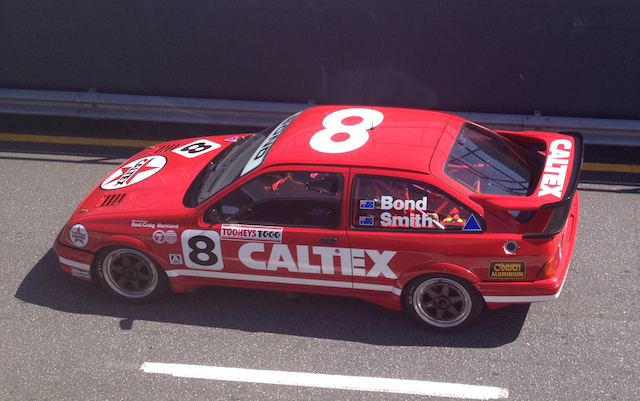 The latest Heritage Touring Cars feature focuses on one of the most lightly raced Group A cars of all-time; the Caltex Ford Sierra RS500 Cosworth of Rod and Craig Markland.

Former Bathurst winner Bond swapped to Sierras in 1988 and ran the four-cylinder Fords for five years through to the end of the Group A rulebook in 1992.

Despite the rules being about to change to five-litre V8s and two-litre cars for 1993, Bond constructed a brand new Sierra for the 1992 Tooheys 1000 at Bathurst. 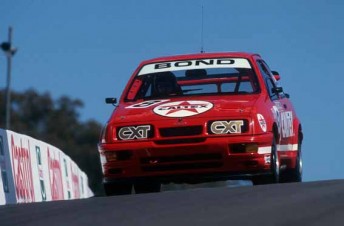 The Sierra enjoyed only a brief outing at Bathurst in 1992

Open-wheeler star John Smith – who would be joining Bond in a two-car Toyota Corolla Seca team under the new two-litre rules the following year – joined him as co-driver for Bathurst with the car adopting Bond’s familiar #8.

Bond turned 50 just before the race but that would be the limit of celebrations for the team at Mount Panorama that year.

They qualified 12th and narrowly missed a spot in the Tooheys Top 10 Shootout but only lasted seven laps in the race when the oil pressure took a dive and he headed to the pits.

It was pushed into the garage for repair but its day was done and it would never race in Group A again, given Bond used one of his older cars for the non-championship Adelaide Grand Prix support event.

With touring car rules moving to V8s and two-litre cars for 1993, the still all but-brand-new Sierra was put to one side.

“When Bondy finished with it, the Sierra went to John Dawson-Damer’s workshop and was left in the corner there,” says current owner Rod Markland.

“Apparently it stayed there for a long time – so much so that the rats ate the wiring out of it! So Brett Maddren got it back, re-wired it and got it going then sold it to Richard Esprey, who had a BMW.”

“The Caltex Sierra was put up for sale a few years ago, but I missed out and bought a BMW M3 instead,” he said at the time.

“Then at the Phillip Island Classic last year it put a conrod through the block, and the owner agreed to swap it for my BMW!”

Corse Motorsport’s Mick Mitchell – who was a mechanic for Bond’s Caltex team during the Sierra era – was given the job to get the car ready to return to the track and Lawlor joined the Heritage Touring Car category with it. The Bond/Smith Sierra through The Dipper in 1992

When it was given a shakedown at Sydney Motorsport Park, none other than Colin Bond was on hand to see – and slipped behind the wheel for a few laps as well.

Last year in 2013 Lawlor was a regular front-runner and debuted in the car at the season-opening event at the Phillip Island Classic before going on to win a range of races.

Then the car was part of another deal at the beginning of 2014, with Lawlor trading his Caltex Sierra with HTC competitors Craig and Rod Markland’s ex-GIO Nissan GT-R.

The Marklands have been racing the Sierra this year in the Heritage Touring Cars Series and thoroughly enjoying the unique turbo machine.

“I’ve only driven it for 10 laps but it’s a really nice car to drive,” says Markland.

“It feels much more alive than the Nissans we’ve had were. It’s not as forgiving as the HR-31 though. I got more comfortable in the Sierra than I ever did in the GT-R too.

“We’re not trying to run the sort of power they had back in the day. We’re running fairly conservatively with the boost without making the car lack too much performance.

“The car didn’t run a full season back in its Group A life. When a car goes through a season it gets all the little bits and pieces sorted on it, which we’ve been doing with this car. “My son Craig drove it at the Phillip Island Classic and he hadn’t had any miles in it.

“They gave him 10 laps with the international guys for a shakedown and he put it fourth on the grid out of a grid of over 40 cars.

“He ran fourth all weekend just behind the GIO GT-R, Jim Richards’s HR-31 and Bryan Sala’s Sierra. He did exceptionally well.”

The Sierra had a few dramas that prompted its withdrawal from Round 2 of the Heritage Touring Cars Series at Sydney Motorsport Park back in May.

“I’d done some cleaning up and moved one of the oil lines,” recalls Markland.

“It gave us an oil pressure reading from the head instead of the block. So it looked like we were down in oil pressure when we really weren’t!

“But we’ve been going through it and will build the engine up and dyno it soon and get ready for the next event.”

The Caltex Sierra will next be in action in Round 4 of the Heritage Touring Car Series at Sydney Motorsport Park at the Muscle Car Masters on Fathers Day weekend – September 6/7.

VIDEO: Craig Markland at the helm of the Caltex Sierra at this year’s HTC round at the Phillip Island Classic in March.


This feature also appears on the Heritage Touring Cars website. All images courtesy of www.coventrycollection.com.au.