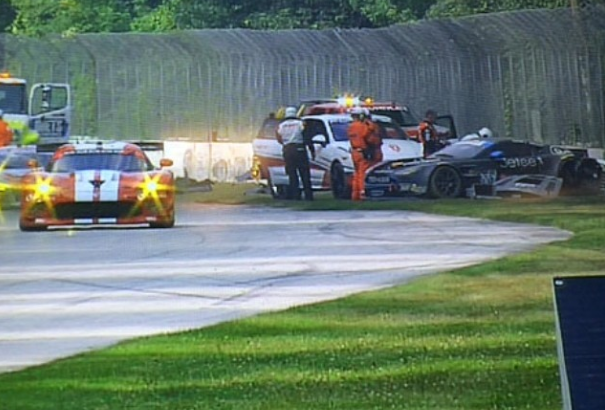 The 27-year-old, who drives full-time for The Racer’s Group Aston Martin squad, was ruled out when his GTD car was struck by the #70 SpeedSource Mazda Prototype driven by Sylvain Tremblay in the warm up session before the race.

Davison, who scored his first career pole prior to the accident, escaped unscathed while Tremblay suffered bruising. Neither car was able to be repaired in time for the race.

“Our race was over before it started today. A Prototype tried lunging me at the high speed kink in warmup.. backed into the wall and destroyed both cars,” said Davison via Twitter.

The race was interrupted by several caution periods but in the end it was left to Barbosa to fight off a hard charging Negri in the closing stages.

Polesitter Scott Sharp and Ryan Dalziel came home in third, while Australian Alex Davison on his United Sportscar debut failed to make an appearance after his Muehlner Porsche 911 GTD retired after 13 laps with David Calvert-Jones at the wheel.

Duncan Cameron and Markus Palttala claimed the honour in the GTD class.

Team Schubert and Callaway Competition shared the spoils in round five of the ADAC GT Masters at the Slovakia Ring.

The BMW of Dominik Baumann and Claudia Hurtgen starred in the opening race as they fended off team mates Jens Klingmann and Max Sandritter in the sister Z4 GT3 by just six tenths of a second. Sven Barth and David Jann claimed the final place on the podium for the RWT Racing Team.

Callaway Competition surprised the field to record their first win of the season when Daniel Keilwitz and Andreas Wirth took the chequered flag in race two.