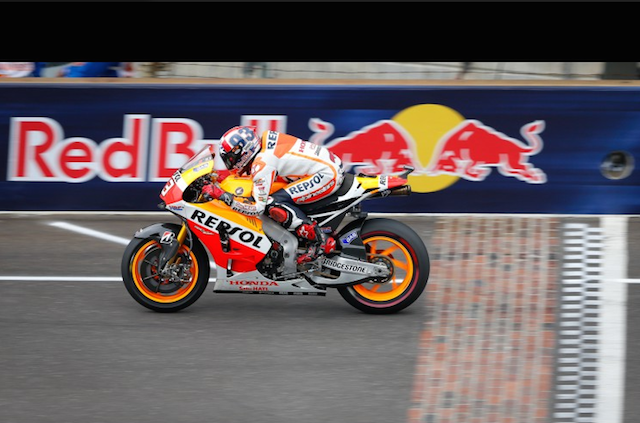 Marc Marquez will begin his quest for a 10th consecutive MotoGP victory from pole position after topping qualifying at the Indianapolis Motor Speedway road course.

The Spaniard’s best of 1:31.62s in Q2 proved 0.23s quicker than Italian Andrea Dovizisoso, who impressed on the first of the Ducatis.

Marquez had made a dramatic mistake on his opening lap of the session, running on through the Turn 1 grass and ending up on the circuit’s oval.

Typically unflustered, the reigning world champion shot to the top of the times on his very next lap, before improving by a further tenth to secure the pole.

“It is really good to be back on pole after the holidays,” he said.

“I am really happy and it gives us a lot of confidence. Our pace for tomorrow it high and if it’s dry I think we can fight for the victory.

“The new layout is good, maybe the old one was better for our bike but overall it’s better to ride,” he added.

“The surface is also a lot better, less bumpy and with more grip. I’ve been working hard with my rhythm on used tyres, I had a little moment because I was pushing.

“Hopefully it is a dry race tomorrow because I think that we can push for the victory.”

Pol Espagaro’s team-mate Bradley Smith will start back in ninth after walking away from a heavy crash in the closing stages of the session.

Just 0.08s separated the top three in a tight session for the entry level class.

“I’m looking forward to tomorrow; I think it will be very hard because the front group will feature many riders,” said Miller.

“Hopefully I can get the best possible result.”