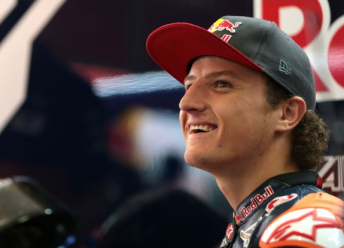 The future of Australian Moto3 star Jack Miller is set to become clearer, with an announcement imminent that the teenager will make the leap into the MotoGP premier class.

The Townsville native’s 2015 plans have been the subject of intense speculation for some months.

News Ltd today reports that Miller is now a “done deal” at Repsol Honda, where he will “join reigning world champion Marc Marquez in the fully factory-backed Honda team”.

“Sometimes he was taking too much risk and crashing, but he was still showing what I think is the most important thing in a rider, like Casey (Stoner) said, the attitude of don’t give up and don’t complain about what you have, try to get the best out of what you have,” said Suppo.

With current stars Marquez and Pedrosa already contracted for 2015, Miller’s ascension to MotoGP will require an extra entry.

Although yet to be confirmed, it is thought likely that the Honda Racing Corporation will make a production-specification Honda available for Miller to ride in his rookie season.

Such a scenario could be expected to see Miller’s bike prepared by satellite squad LCR, whose principal Lucio Cecchinello first revealed Honda’s interest in the Australian last month.

Miller’s rise straight into MotoGP is understood to have been partly orchestrated by championship promoter Dorna, which has a history of ensuring a spread of nationalities are represented in the premier class.

The presence of a promising Australian, which had seemed a far-off prospect when Casey Stoner retired at the end of 2012, would have a major impact on the next local television rights deal, due to be negotiated in 2016.

Miller will start today’s Moto3 grand prix at Indianapolis from pole position after coming out on top in a tight qualifying session.