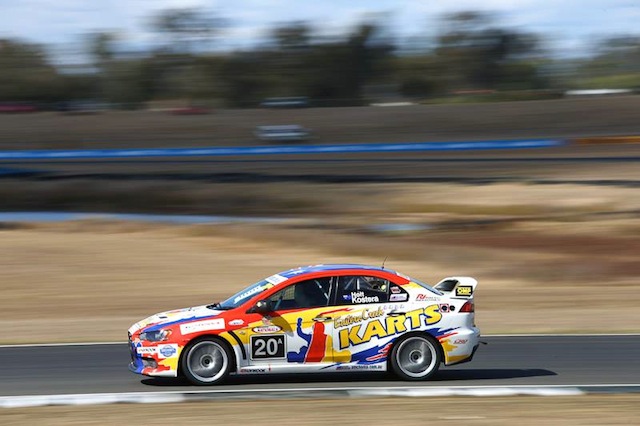 Stuart Kostera and Garry Holt picked up an impressive Australian Manufacturers enduro double as they made the most of problems for long time leader Aaron Seton.

Fresh from the Fight in the Night win, the Mitsubishi EVO duo seemed to be heading for a second place finish until a broken exhaust nine laps from the end forced leader Seton to pit and handover the lead.

With Seton otherwise disposed having previously been shown the mechanical flag by officials, Kostera brought home a second 200km race win of the weekend with Beric Lynton’s BMW second more than 30 seconds down the road.

The Sherrin Rentals BMW of Grant and Iain Sherrin rounded out the podium in third.

“It was a great performance, the night race last night was a great race and this round was definitely the hardest round to win,” said Holt.

“We had to push all the way and drive it like a sprint race for both races, until unfortunately Aaron (Seton) had the problem and the (mechanical) flag and eased off.” 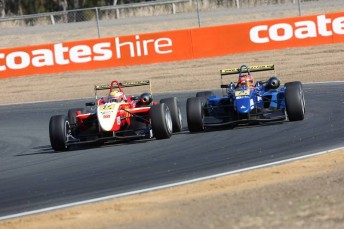 Team BRM driver Simon Hodge secured a crucial round win to maintain his lead in the Formula 3 Australian Drivers Championship.

A strong start to the final race allowed Hodge to go on to record a vital win to stem the deficit to rival Ben Gersekwoski, who won the first race on Sunday, after storming to victory in Saturday’s opener.

Once in front Hodge had the race under control as he steadily built a lead over Gersekowski who could only settle for second spot.

The earlier race of the day provided plenty of drama as Gersekowski was forced to defend hard from Hodge for the entire race.

Unbeknown to Hodge, the South Australian was handed a five second time penalty for a jump start which dropped him from second to fourth at the flag.

Patterson and Anthony joined Gersekowski on the podium.

Hodge leaves Queensland Raceway with a 13 point lead over Gersekoski 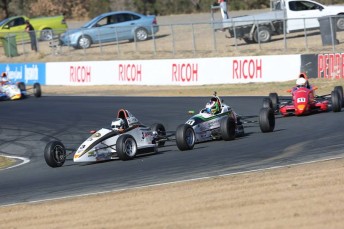 Hamish Hardeman claimed the Australian Formula Ford round win as he shared the Sunday spoils with James Golding.

Hardeman won a drama filled opening race of the day which was decided at the last corner of the final lap.

Jordan Lloyd led from pole with Rowe, Hardeman and Golding in hot pursuit, but by lap six the lead changed.

Rowe managed to pass Lloyd at Turn 3 but Lloyd continued to push and regained the lead just two laps later.

Hardeman, Golding and Tom Randle continued to hang onto the pair ensuring a five car battle for the race win.

In the end, it came down to the final corner when a lunge from Rowe saw him touch wheels with Lloyd sending the race leader into the air.

This allowed Hardeman to come through to take the win from Golding and Cameron Hill. Rowe was given a 30 second time penalty for his part in the incident, which dropped him to 13th, while Lloyd came home in fifth.

Golding denied Hardeman a double win in the final race of the with a slick drive to the chequered flag.

Hardeman led from the outset but Golding grabbed the lead at Turn 6 in the early stages here he stayed for the remainder of the race. Hardeman finished second with Lloyd in third. 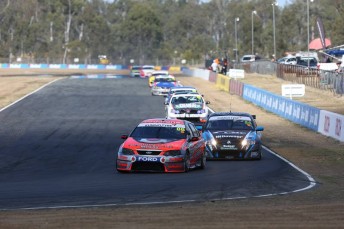 Ryan Simpson once again proved to be the dominant force in the Kumho V8 Touring Car Series after leading home Justin Ruggier twice for an event treble.

The Parramatta Smash Repairs driver enjoyed a tense battle with Eggleston Motorsport’s Ruggier in the first race of the day, before having to pick his way through chaos to triumph in the final encounter.

Ruggier led from the start of the day’s second race while Simpson was demoted to third by Matt Chahda’s BA Falcon. Ryan Cochrane and Chris Delfsma made contact at the start forcing the latter into retirement.

However, a mistake by Ruggier at Turn 3 saw him run wide and gift Simpson the lead who had passed a slowing Chahda.

Drew Russell moved into second but he soon came under pressure from a recovering Ruggier, who eventually slid by to claim the runners up spot at the flag.

The all powerful Alfa Romeo GTV of Tony Ricciardello proved to be unbeatable once again as he completed a Kerrick Sports Sedans treble by recording another two commanding victories on Sunday.

The Audi of Darren Hossack pushed Ricciardello hard in the early stages of both races, but the GTV had the measure of his arch rival. Hossack and the Aston Martin of Kerry Baily completed the podium in both races.

Kane Baxter-Smith won the round in Dial Before You Dig Australian Super Six Touring Car Series after recording a clean sweep of victories.