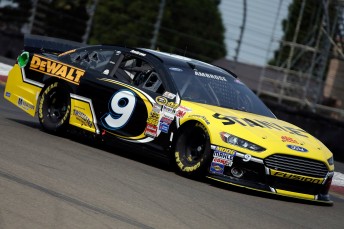 Marcos Ambrose has been pipped by Jeff Gordon for the pole in the Sprint Cup Cheez-It 355 at The Glen.

“I am very proud of my RPM team and everyone. It has been a great weekend for us so far,” said Ambrose.

“I wish Jeff was a little kinder to me to let me get the pole. I thought we had it at the end but it wasn’t enough.

“It was a pretty good lap though and I will take it. You have to be happy with front row starts. Jeff is a fantastic road racer and I have watched a lot of races here where he dominated. He is having a standout year.

“You can’t discount anybody out there. Anyone in that Top-12 if they had gotten the pole I wouldn’t have been surprised.”

Danica Patrick, who will start at the tail of the field because of an engine change, treated qualifying as a practice in her backup car. She placed 43rd.

QUALIFYING: Cheez-It 355 at The Glen