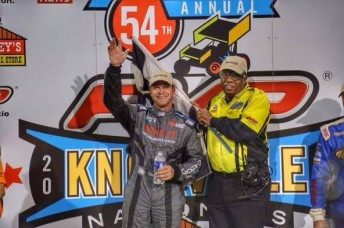 Shane Stewart has won the second night of competition at the Knoxville Nationals, with Aussie Brooke Tatnell finishing eighth.

Stewart hounded Kraig Kinser right to the line before nipping past the son of Sprintcar legend Steve Kinser to take a narrow victory.

The other Aussies in the field Lynton Jeffrey and Glen Saville were unable to progress from the B-Main with Jeffrey finishing 13th and Saville 19th.

Defending Champion, Donny Schatz finished fourth in the preliminary A-Main. By virtue of his second quickest time, he now sits atop the points standings.

Meanwhile, Stewart’s win has elevated himself to second behind Schatz, which has dropped Australian, Kerry Madsen to a third starting position for Saturday night’s $150,000 A-Main.